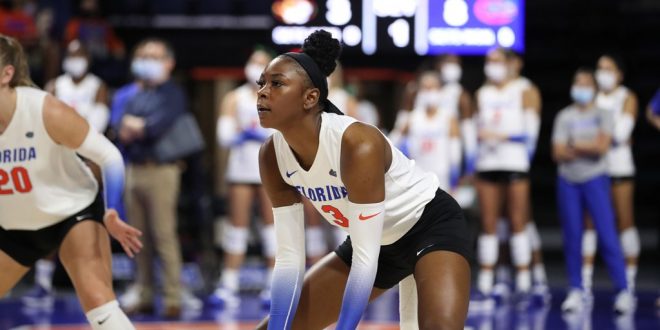 The No. 7 Gators Volleyball team defeated the No. 3 Kentucky Wildcats in a back-and-forth five-set match behind T’ara Ceasar with 20 kills. The Gators extend their win streak to 12 on their senior day.

Both teams kept trading points until Kentucky got a 17-14 lead and finished the set 25-18 to take the first set.

The second set also started and stayed close until Florida went up 12-10 and Kentucky went on an 8-1 run to go up 18-13. Florida pulled a 23-22 lead and went to extra time. Two straight kills by Ceasar won the second set for the Gators 27-25.

For a third straight set, the two teams went back and forth. Kentucky got to a 21-16 lead. The Wildcats finished the set 4-1 to go up 2-1 in the match.

In the fifth and shorter set, the lead was never more than 3 at 13-10. Kentucky forced a 15-15 tie, then Florida finished at 17-15 to win their third straight victory against a Top-25 opponent.

T’ara Ceasar registered her eighth double-double of the season with 20 kills and 12 digs as well as adding on three aces.

Lauren Forte had a season-high 12 kills.

The Gators improve to 52-16 in the all-time series against the Wildcats.

“There was some seriously exciting volleyball played today, with a match that could have gone either way,” Gators coach Mary Wise said, “We like to think that both teams are better having played against one another.”

The Gators play Kentucky against on Saturday. They play in the O’Connell Center in Gainesville with Florida looking to improve to 18-2 this season.

Jensen Young is a journalism student at the University of Florida. He works as a sports writer for WRUF.com and is the voice of trendings on Wednesday mornings on the WRUF radio station.
@Jensen_Young9
Previous Gators Men’s Hoop Advance in overtime win 75-70 over Virgina Tech
Next Florida Baseball Win Back-To-Back Games In First SEC Series