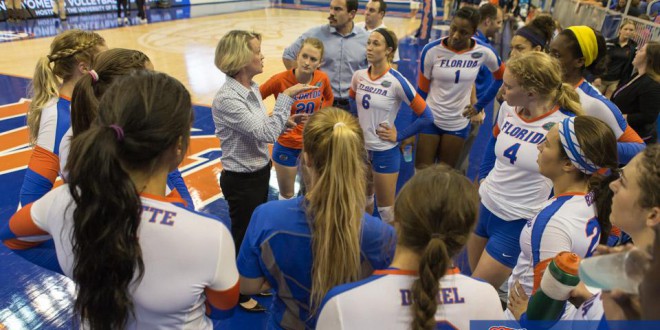 Florida head coach Mary Wise talks with her team before their match against New Hampshire.

The No. 3 Kentucky Wildcats are taking a trip to Gainesville this week. The No. 7 Florida Gators will be hosting the blue and white in their second-to-last team matchup of the season.

Ready for a Florida vs. Kentucky volleyball rivalry series this weekend?

The Gators will be hosting the Wildcats in their last home matches of the season. This two-day series will start on Friday and head into Saturday.

Florida is 16-2, on an 11 game win-streak. This includes Florida’s wins over Missouri last week. On top of that, the orange and blue are 9-1 at home. Both of the losses the Gators faced came in November, one to South Carolina and one to Georgia.

Before Saturday’s first serve, the Gators will be honoring their seniors in Senior Day fashion. The players being honored include Holly Carlton, Paige Hammons, Darrielle King and Mia Sokolowski.

Sokolowski is a 6 foot 4 outside and right side hitter. This season, she had 11 kills, three digs and four blocks.

The undefeated Kentucky Wildcats are coming off of a win against Ole Miss on Saturday. The team is 16-0 heading into the matchup with Florida and is slated to face off against the University of Alabama on Wednesday and Thursday.

The Wildcats are the only team left in the SEC that remains undefeated.

Here is what Florida head coach Mary Wise had to say about Kentucky’s season.

Kentucky’s two postponed series with University of South Carolina and Texas A&M, have still not been rescheduled.

The Gators and Wildcats have played 67 games in their history together. In Gainesville, the Gators are 24-8 against the Wildcats, and overall lead Kentucky 51-16.

Tune into live coverage of Friday’s matchup on SEC Network+ or listen live on ESPN 98.1 FM/850 AM WRUF.

Rylee is a third year Journalism major with a specialization in sports and media at the University of Florida College of Journalism and Communications.
Previous Gators Men’s Hoops open NCAA Tourney against Hokies
Next March Madness: Breakdown of Virginia Tech