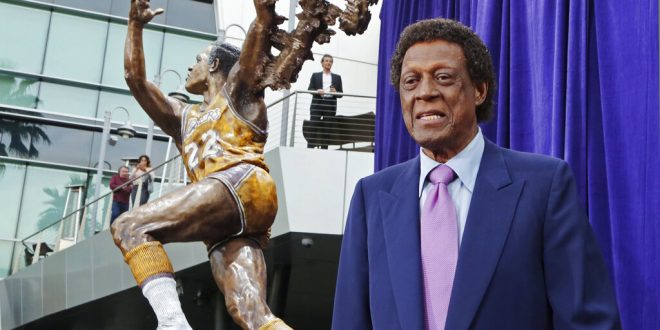 FILE - Elgin Baylor stands next to a statue, just unveiled, honoring the Minneapolis and Los Angeles Lakers great, outside Staples Center in Los Angeles, in this Friday, April 6, 2018, file photo. Elgin Baylor, the Lakers’ 11-time NBA All-Star, died Monday, March 22, 2021, of natural causes. He was 86. The Lakers announced that Baylor died in Los Angeles with his wife, Elaine, and daughter Krystal by his side. (AP Photo/Reed Saxon, File)

Elgin Baylor, who played 14 seasons with the Minneapolis/Los Angeles Lakers, spent four seasons coaching the New Orleans Jazz, and 22 seasons as an executive with the Los Angeles Clippers before ending his tenure in the NBA, has died at the age of 86.

The Lakers reported the news Monday that Baylor died of natural causes with his wife, Elaine, and daughter, Krystal, by his side in Los Angeles.

“Elgin was THE superstar of his era – his many accolades speak to that,” said Buss. “But more importantly he was a man of great integrity, even serving his country as a U.S. Army reservist, often playing for the Lakers only during his weekend pass. He is one of the all-time Lakers greats with his No. 22 jersey retired in the rafters and his statue standing guard in front of STAPLES Center. He will always be part of the Lakers legacy.”

Baylor was born in Washington D.C. on September 16, 1934 to Uzziel Lewis and John Wesley Baylor. He only began playing basketball at the age of 14.

Baylor played basketball at two high schools and the College of Idaho before leading Seattle University to the NCAA Tournament Championship Finals in 1958. Following the season, Baylor was selected first overall by the Minneapolis Lakers in the 1958 NBA Draft, two season before the team moved to Los Angeles.

NBA Career With the Lakers

Baylor won Rookie of the Year in 1959 averaging 24.9 points per game, 15 rebounds a game, 4.1 assist per game. The impressive campaign helped lead the Lakers to the first of eight Finals appearances during Baylor’s career with the team.

Despite the impressive career, Baylor never won an MVP or an NBA title. Something made more unfortunate as the Lakers won an NBA Championship in the 1971-72 season, a year in which Baylor played nine games before retiring due to nagging knee problems.

In a statement released Monday, former teammate and fellow Hall-of-Famer Jerry West spoke on his special relationship with Baylor calling him “one of the greatest men I’ve ever met in my life.”

Similarly, other current and former players around the NBA released statements speaking on Baylor’s impact.

RIP to the NBA’s first high flyer, Lakers Legend, & Hall of Famer Elgin Baylor. Before there was Michael Jordan doing amazing things in the air, there was Elgin Baylor! A true class act and great man, I’ll always appreciate the advice he shared with me when I first came into the pic.twitter.com/khPRc73gqW

Losses like the one we suffered today I can’t put into words. Our love to Elaine & the family #RIP Rabbit aka Elgin Baylor. I love you my friend #ElginBaylor pic.twitter.com/qT34sXE05T

One of the all-time greats, and perhaps the best player to ever come out of the District. RIP to the legendary Elgin Baylor. https://t.co/0fQ2DjChrH 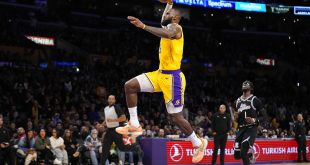