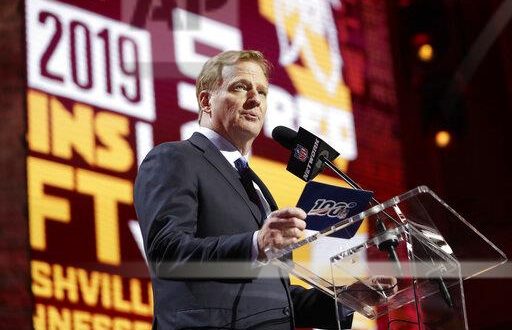 NFL Commissioner Roger Goodell announces that Mississippi State defensive end Montez Sweat has been selected by the Washington Redskins in the first round at the NFL football draft, Thursday, April 25, 2019, in Nashville, Tenn. (AP Photo/Mark Humphrey)

The 2014 blockbuster film Draft Day said it best, “football was invented 20 miles down the road in Canton, Ohio. This is a football town. It’s in our DNA.”

That was Cleveland sports radio host Tony Rizzo talking in the movie. Cleveland, Ohio: Home of the Browns. Home of football. Home of the 2021 NFL Draft.

After months of uncertainty, the NFL cleared the air. The league announced Monday that this year’s NFL Draft will go on as scheduled, fully in-person. The event will take place from April 29-May 1 in Cleveland.

Expect to hear plenty of boos just before 8 p.m. on April 29.

The NFL confirmed that commissioner Roger Goodell will be in attendance and on stage to announce each first-round selection. During last year’s virtual draft, Goodell fully embraced the boos he annually receives from fans.

There to boo Goodell will be thousands of socially distant, masked fans. The NFL has not yet confirmed how many fans, but the draft’s open location in downtown Cleveland leaves plenty of room for spectators.

“Set against the backdrop of Lake Erie, the NFL Draft Main Stage will serve as the central hub for Draft activities,” the league’s official release said.

Festivities will take place all around First Energy Stadium, stretching from the Mall at Huntington Convention Center to the plaza outside the famous Rock and Roll Hall of Fame.

The three-day event will be telecast on ESPN, ABC, and NFL Network. Just as in prior years, the first round will take place on April 29 at 8 p.m., the second and third rounds at 7 p.m. the next day, and rounds four through seven on the following day at noon. The release mentioned that further broadcast details will be released at a later date.

From a team’s perspective, the NFL confirmed that, “club personnel involved in the selection process will be permitted to gather in a Draft Room at a location of their choosing, whether that be their facility or elsewhere while following appropriate protocols.”

At the exact time of this writing, the NFL Draft will begin in 37 days, six hours, four minutes, and 43 seconds.

The NFL’s annual league draft never fails to surprise and excite. This year — like every year — has plenty of intrigues. A perfect mock draft is as unlikely as a perfect bracket.

Hundreds of lives changed. Hundreds of dreams come true. Every team with newfound hope and excitement. Nothing compares to the spectacle of the NFL draft.

Trevor Lawrence will be drafted first overall by the Jacksonville Jaguars. After that, it’s anyone’s guess. Where will Florida’s Kyle Pitts land? Where will the rest of the quarterbacks end up? There are hundreds of unanswered questions to ask.

Will Levenson is a Journalism and Sports Media major at UF. He produces daily shows for WRUF, including "Sport Scene with Steve Russell," "Harp on Sports," and "The Tailgate." In addition, Will provides weekly sports updates for WUFT News and radio Sportscenters for WRUF radio. Will has been a writer at ESPN Gainesville since September 2019.
@BigWillLevenson
Previous Rockets Stop Slump, Defeat Toronto
Next NBA Great and Lakers Legend Elgin Baylor Dies at 86