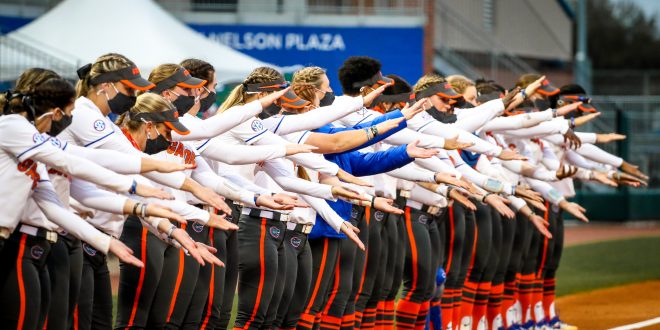 The Florida Gator softball team (27-4) took the series against the Georgia Bulldogs (23-7) with an 8-1 win Monday night. Charla Echols belted two home runs in the win, her second multi-home run game of the year, and Katie Chronister earned her fifth win in the circle.  Mary Wilson Avant took the loss, only her third of the season.

With the win, the Gators improve to 10-2 in conference play and stay in second place in the SEC standings. The Bulldogs drop into a tie for eighth place in the conference with the loss.  In the last two games of the series, Florida outscored Georgia 25-2 after a 17-1 rout on Sunday.

The Gators picked up right where they left off on Sunday, putting up three runs in the first frame. Hannah Adams reached on a bunt single to start the game, and Charla Echols belted a no-doubter home run to give the Gators an early 2-0 lead.

Florida then loaded the bases with one out on two base on balls and a hit by pitch, and Avery Goelz stepped up to the plate. The freshman grounded out to second base but scored Julia Cottrill in the process to put the Gators up 3-0.

So Nice, She Did it Twice

In the top of the fourth, Echols did it again. The third baseman ripped a 2-1 pitch over the center-field wall and into the Athens setting sun for her second long ball of the night to give the Gators a 4-0 lead. After going 1-for-12 over the previous four games, Echols broke out of her short slump in a big way.

Katie Chronister earned her first win in SEC play after not taking a decision since her loss at FSU on March 6. The fifth-year pitcher gave up only one earned run through four innings while giving up five hits to the Bulldogs.

In her past two appearances, Chronister gave up one run to UCF and four runs to LSU, so Monday’s performance marked a return to her usual success.

Natalie Lugo took it the rest of the way for the Gators after coming on in relief in the top of the fifth. Lugo was lights out in her three innings of work, literally. The senior ace struck out three Georgia batters while earning the save, and mere moments after her second strikeout in the bottom of the sixth, the lights shut out at Jack Turner Softball Stadium.

The jumbotron acted as the sole light in the ballpark for about 20 minutes before the stadium lights eventually cut back on, and action resumed 23 minutes after the power outage. With both teams back on the field, Lugo forced a groundout to end one of the more bizarre innings either team has played in.

Avant pitched a season-high 151 pitches in a complete-game effort. She gave up eight runs, four of which were earned, and walked six batters in the loss.

Georgia’s sole run came on a solo shot from Savana Sikes in the bottom of the third. The Dawgs put up five hits in the losing effort, but couldn’t manage to score runners. Their fielding woes continued, as well. The Bulldogs entered the game last in the SEC in fielding percentage and tied for first in errors. And the trend continued, as they committed two errors in the contest.

They’ll look to rebound with a midweek matchup at Kennesaw State and a road series at Kentucky.  Florida will host USF in a doubleheader on Wednesday.

I'm a third-year student at the University of Florida passionate about storytelling and sportswriting. My goal is to work in communications for a professional sports team after I graduate.
Previous Baylor Stuns Gonzaga 86-70
Next Buchholz Softball Falls to Williston After Earlier Win Against Them This Season