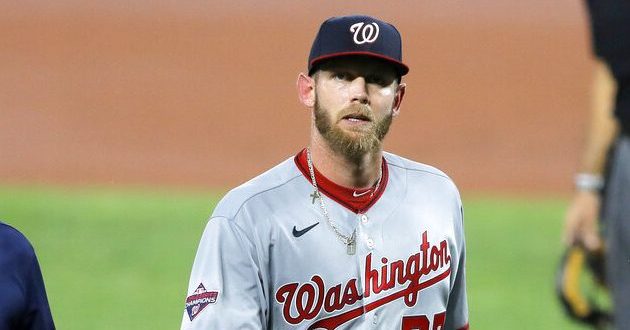 FILE - Washington Nationals starting pitcher Stephen Strasburg, right, walks with a member of the training staff as he heads to the dugout after leaving the game during the first inning of a baseball game against the Baltimore Orioles in Baltimore, in this Friday, Aug. 14, 2020, file photo. Nationals general manager Mike Rizzo said Thursday, Feb. 18, 2021, that Strasburg “is in preparation mode not in rehabilitation mode” at spring training after having surgery in 2020. (AP Photo/Julio Cortez, File)

Opening day in the MLB usually marks a sign of hope and renewal. For the Washington Nationals, it was anything but that.

Thursday morning, multiple Nationals players tested positive for COVID-19, and the team’s opening series against the New York Mets was canceled. Monday’s duel with the Atlanta Braves was shelved as well.

But on Tuesday, Washington’s season finally got underway as the Nationals defeated the Braves in a thriller. Star outfielder Juan Soto delivered a ninth inning walk-off single to score Victor Robles and win it for Washington.

Washington sent out its ace, Max Scherzer, while the Braves dispatched Drew Smyly. Some say that a season can be determined based on the first pitch, and if that’s true, then the Nationals maybe in for a long season. Atlanta all-star second baseman took Scherzer’s first pitch of the game and bombed it over the left-field wall.

Two batters later, Freddie Freeman made it 2-0 with a homer of his own. Smyly promptly retired the Nats in order before Dansby Swanson kept the long ball party going with a leadoff dinger to start the second.

The Nationals put runners on first and third with two outs when Jonathan Lucroy ripped one to left. The double scored both players, but the catcher was thrown out at third.

Atlanta managed another lead off big one in the third, when Acuna went yard for the second time on the day, placing Atlanta up 4-2. It did not take long for the Nationals to even it up as Trea Turner homered to left, knotting it at 4-4.

Trea Turner is The Most Underrated Player in @MLB™@treavturner// #NATITUDE pic.twitter.com/D3oWPzqTVR

After eight combined runs in the first three innings, a pitchers duel ensued. Both sides were retired in order in the fourth, fifth and sixth innings. The Braves finally broke through with Kyle Finnegan on the mound and retook the lead on an Acuna ground out with one out and the bases loaded. In the bottom of the inning, the Nationals themselves loaded the bases, but Turner flew out, ending the inning.

Washington managed to tie it up though in the next inning, loading the bases with just one out. Left fielder Andrew Stevenson reached out an infield single, scoring Starlin Castro.

In the ninth, Atlanta brought in right-hander Will Smith. Smith had pitched once before this season, opening day versus Philadelphia. He shut the Phillies down in the ninth, before the Braves fell in the 10th. Smith struggled from the get-go Tuesday. Robles singled, Smith hit Turner and Soto sent the team and fans home happy with a deep single.

Atlanta and Washington play a doubleheader Wednesday to make up for Monday’s postponement. First pitch in game one flies at 12:05 p.m., while game two will be at 3:05 p.m. Both games will be seven innings, in accordance with the MLB’s new rules. Max Fried and Erick Fedde battle in the first game and Huascar Ynoa and Stephen Strasburg go at it in game two.

Previous Rays on a 3-game Losing Streak Heading into Matchup with Red Socks
Next Padres’ Tatis Jr. may be able to avoid shoulder surgery