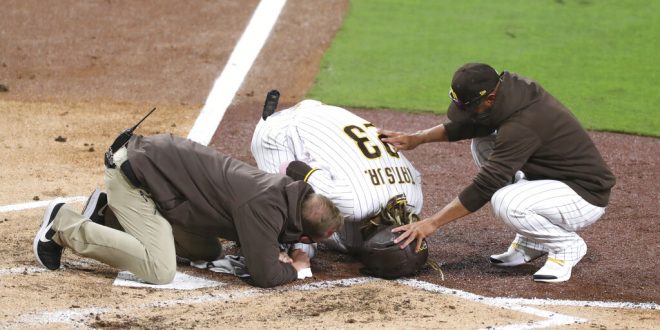 San Diego Padres manger Jayce Tingler, right, and a trainer, left, attend to Fernando Tatis Jr., center, after Tatis hurt his shoulder while swinging at a pitch in the third inning of a baseball game against the San Francisco Giants, Monday, April 5, 2021, in San Diego. (AP Photo/Derrick Tuskan)

Padres’ Tatis Jr. may be able to avoid shoulder surgery

Fernando Tatis Jr., one of baseball’s brightest stars, went down earlier in the week after injuring his shoulder while batting.

Tatis is the San Diego Padres shortstop who just signed a major contract extension after a breakout season in 2019. He suffered a partially torn labrum when he followed through on a swing that came back and hit his back-left shoulder.

Initially, it was unknown whether Tatis would opt to rehab the injury or receive surgery. Now, it appears that surgery may not be necessary for Tatis, and he will spend a few weeks recovering before trying to return.

The San Diego Padres say shortstop Fernando Tatis Jr. should be able to avoid surgery on his left shoulder.

An MRI on Tuesday showed a slight labral tear and the Padres put the electrifying 22-year-old on the 10-day injured list. https://t.co/QRgIMOhNN1

A Look at the Shoulder Injury

In a game against the Giants last Monday, Tatis stepped up to bat in the bottom of the third inning. After going down in the count, Tatis struck out on a breaking ball, then immediately fell to the ground in agony.

Upon first look, it appeared that Tatis might have stretched or torn something. But after looking at the replay, it seemed clear that the injury occurred on Tatis’ follow through, with his bat clipping his shoulder.

When Tatis’ bat hit his shoulder, he suffered a subluxation, or a partial dislocation, of his left shoulder.

Though the injury is to Tatis’ non-dominant (left) arm and shouldn’t heavily affect his throwing, it is bad news for his batting. Tatis’ left shoulder is his front when batting, and that sort of injury could impact his power. The Padres will hope one of their strongest offensive weapons can make a full recovery.

The timetable for Tatis’ return is still up in the air, as the full extent of his injury and the damage is not clear. However, the chance to skip surgery shrinks the possible timetable from several months to as little as a few weeks.

Padres General Manager A.J. Preller is optimistic about Tatis’ recovery, based on current reports from doctors. Preller emphasized caution, stating his intent to leave Tatis out of the lineup for the near future.

On the other hand, Preller explained that surgery for Tatis isn’t out of the question yet. The full extent of his injury is unknown, and there’s a chance he may still need surgery down the road.

With so much doubt surrounding Tatis’ injury, the best thing to do is take it one day at a time. And at least for now, the outlook for his recovery seems positive.

Previous Nationals begin season after delay, walk-off against Braves
Next Gators Add a Man From the Transfer Portal