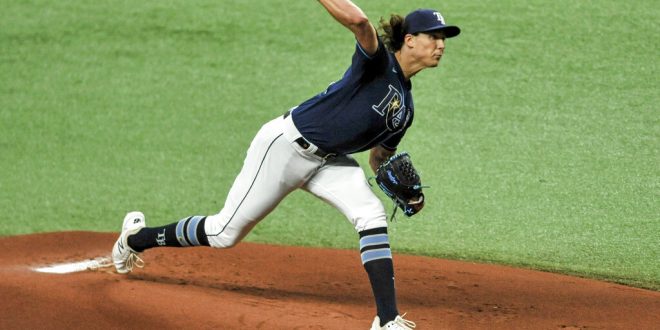 It was an all-out pitchers duel as the Tampa Bay Rays defeated Texas Rangers 1-0.

The win was not the only reason for celebration for the Rays, however. At batting practice before the game, the Rays received their American League Championship rings.

“They’re beautiful. … I think all of us were blown away by them,” center fielder Kevin Kiermaier said

Tyler Glasnow pitched a career night against the Rangers, striking out 14. He took a no-hitter through five innings and also struck out the side three times in the first six. Glasnow allowed just three hits in his 102 pitch, 7 2/3 inning performance.

After a shaky start to the season, there was no doubt that Glasnow earned his first win of 2021. He retired the first 11 batters before surrendering a two-out walk in the fourth inning. Every member of the Rangers’ lineup, except Ronald Guzman, struck out at least once on the evening.

While Glasnow’s outing was the talk of the evening, the Rangers’ pitching staff put together quite the show as well, starting with former Florida Gator Dane Dunning. In just his second start for Texas, he went four innings only giving up two doubles in the first two innings. Dunning also recorded five strikeouts and only walked two.

Taylor Hearn came on in relief in the fifth inning and also contributed three solid innings of work. The only run allowed was a two-out homer to Willy Adames in the seventh. Hearn struck out seven, walked two and the homer was the only hit surrendered.

While both sides had a great night for pitching, neither team put on much of a show on offense. Adames’ homer in the seventh was the only run scored of the game. The Rays picked up just three hits, with two of those hits coming from the eight and nine-hole in their lineup.

Thank you to No. 1 pic.twitter.com/toPMXNEop5

The Rangers were shut out for the second consecutive night and have not scored a run in their last 23 innings. This contest marks Texas’ fourth consecutive loss, three of which they have been shut out. It’s only the fourth time since the franchise came to Texas, they have suffered three shutouts in a four-game span.

These two teams will face off again tonight as their four-game series continues. Kyle Gibson will take the mound for the Rangers and the Rays will counter with lefty Ryan Yarbrough. First pitch is set for 7:10.