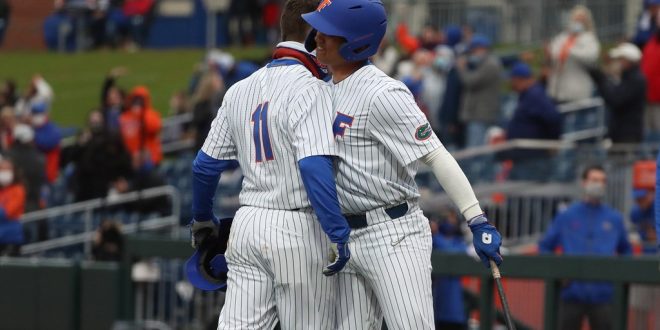 From 6:30 pm to 9:20 pm, it was nearly three hours of tarp action at the Florida Ballpark before Gator starting pitcher Franco Aleman took the bump.  The water still trickled down, but the Gators brought their thunder putting up eight runs against Missouri. Most of the drama came quickly in the delayed game, with the offense booming for both teams in the third and fourth innings as Florida held on for an 8-5 win over Missouri.

Gators In The Third

Jud Fabian gave the Gators the edge in the second inning with a solo homer, his 12th of the year, the second most in the SEC.

That's Jud Fabian's 12th home run of the season. 2nd most in the SEC.

In the third inning, Florida exploded for five runs. Kirby McMullen launched a three-run shot to raise the score 4-1 for the Gators. An RBI single from Jordan Butler and an RBI triple from Kendrick Calilao, made the score 7-1.

Tigers in the Fourth

Missouri answered back. Luke Mann had an RBI double and then there was an RBI single from Mike Coletta. The score was now 7-4 Florida and that rally knocked out Aleman. Reliever Christian Scott took the mound and gave up a sacrifice fly by Mark Vierling to make it a 7-5 game.  But Scott shut the door from there in a brilliant relief outing for the Gators.  Florida would add an insurance run and won the game 8-5.

What has been the most consistent thing with the Florida Gators this season? Inconsistency. From all areas of the diamond, Florida has been dominant one day to silent the next. But, two things tonight show a glimmer of hope for consistency. The offensive power in Florida’s lineup is clear, but it has seen some quiet nights. Fabian, specifically, has been hot and cold. Perhaps tonight’s long ball is the spark he and the Gator offense need. From the mound, Gator pitching has seen shutout innings and run-riddled outings. Aleman saw his night end in the middle of the third. However, Christian Scott would go 5.2 innings and gave up no runs. In his two latest outings, he has been near perfect with 10.1 innings pitched, zero earned runs allowed and nine strikeouts.

Together, the pitching and hitting slumps may be fenced. It may be what Florida needs to start making a run for Omaha. They get a chance for back-to-back wins against the Tigers Saturday with the inclement weather moving the game to 1 pm.

Previous Brooklyn Nets Center Lamarcus Aldridge Retires from the NBA
Next Gators Take Game 1 Against No. 3 Alabama in Shutout