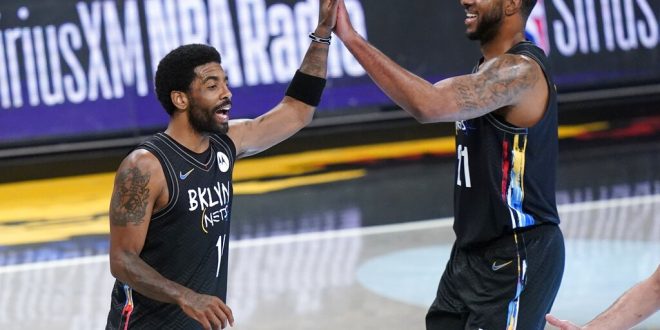 Brooklyn Nets' Kyrie Irving (11) celebrates with LaMarcus Aldridge (21) during the second half of the team's NBA basketball game against the New Orleans Pelicans on Wednesday, April 7, 2021, in New York. (AP Photo/Frank Franklin II)

LaMarcus Aldridge of the Brooklyn Nets has announced his retirement from the NBA.

LaMarcus Aldridge was drafted in 2006 after attending and playing basketball for the University of Texas for two years.

Aldridge was drafted 1st round second pick to the Chicago Bulls but was traded to the Portland Trail Blazers, where he spent nine years of his career. Before Shortly signing to the San Antonio Spurs in 2015. From then to recently he was traded to the Brooklyn Nets.

The Brooklyn Nets are some would say they are a super team of the NBA this season adding Kevin Durant, Kyrie Irving, and James Harden to their roster. They are well on their way to winning an NBA championship with that much caliber. Aldridge joined the team on March 21 shortly after the trade deadline.

In his last game with the Nets, he played against the Los Angles Lakers where he experienced an irregular heartbeat that made his decision to retire from the NBA none questionable.

LaMarcus Aldridge announced his retirement to the world on Thursday, April 15, via, Twitter.

“Though I’m better now, what I felt with my heart that night was still one of the scariest things I’ve experienced.”

Aldridge was diagnosed in 2007 with Wolff-Parkinson-White syndrome, “an extra electrical pathway between your heart’s upper and lower chambers that causes a rapid heartbeat.

Lamarcus Aldridge is a seven-time all-star and one of the league’s predominately known power forwards. His mark will continue through the NBA as he retires with an all-time scoring record of 19,951 carrier points. Also leaving his mark as the third all-time leading scorer in Portland Trail Blazers history and also first in rebounds. Lamarcus will turn 36 years old this July.

“For 15 years I’ve put basketball first,”And now, it is time to put my health and family first.”