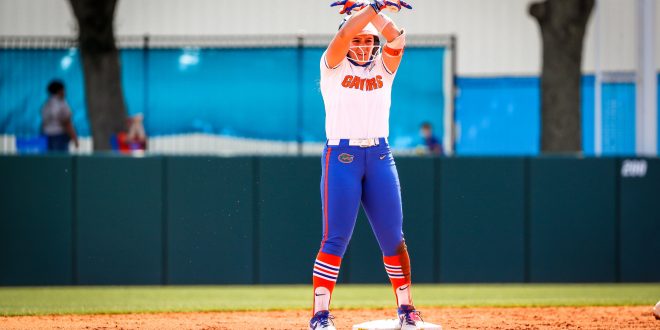 The No. 5 Florida Gators softball team (31-5) won 2-0 over the No. 5 Alabama Crimson Tide (32-6) in Tuscaloosa on Friday night. Elizabeth Hightower earned her 14th win in a complete-game shutout, limiting the Tide to three hits. The performance marked Hightower’s fourth complete-game shutout in SEC action, as the Gators moved to 11-2 in conference play.

The Crimson Tide put runners on second and third with a single and a walk in the bottom of the first but couldn’t convert. In the next frame, the Gators got on the scoreboard for what would end up being the only runs of the game.

Kendyl Lindaman led off the top of the second, reaching base on a walk. Catcher Julia Cottrill then laced a single down the left-field line to put runners on first and second with no outs.

Two batters later, with two outs, Sarah Longley capitalized on the opportunity. The sophomore shortstop spiked a high groundball over the second base bag to score both Lindaman and Cottrill and give Florida a 2-0 lead.

Longley is thrown out trying to advance to second base.

Bama catcher Bailey Hemphill threw out Longley at second trying to extend the single into a double, but the damage had been done.

From there, the Gators rode an excellent performance from Hightower and great defense to victory. The Tide started a rally in the bottom of the third when KB Sides and Bailey Hemphill both singled to put runners on first and second.

With two runners on and one out, Kaylee Tow ripped a grounder to the left side but right to Charla Echols at third base who turned the 5-4 double play to end the inning.

In the sixth, the Tide fell victim to another inning-ending double play. Hemphill drew a one-out walk, and Sarah Cornell entered the game to pinch run for her. But the next batter lined out to Hightower on the mound who fired a throw over to first base to double up Cornell.

Montana Fouts got the start for Alabama and pitched her own complete game but took the loss in the performance. The junior ace struck out 11 in the start but walked five and gave up six hits. The loss marked just her third of the year, as she now sports a 13-3 record.

Repping the circle for the orange and blue, Elizabeth Hightower took care of business in Tuscaloosa. The Gators ace faced 25 Alabama batters, struck out four and limited them to only three hits. With the win, she moves to 15-2 on the season with a 1.22 ERA.

Lots More on the Line

The Gators will look to clinch the weekend series against Alabama on Saturday, as the two teams face off in game two at 2 p.m. on ESPN2.

I'm a third-year student at the University of Florida passionate about storytelling and sportswriting. My goal is to work in communications for a professional sports team after I graduate.
Previous Gator Baseball Beats Missouri 8-5 in Game 1 of Series
Next Gators Fall on Beam, Place Fourth At Nationals 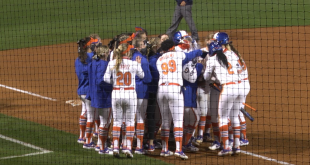