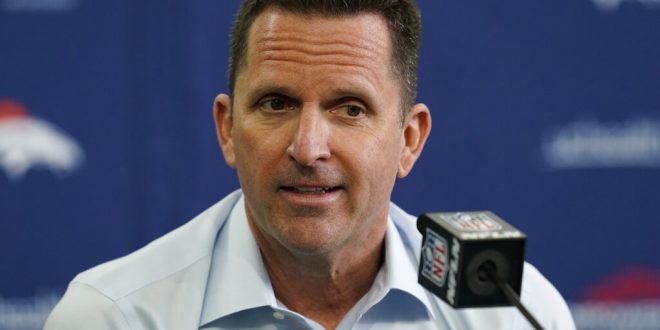 FILE - In this March 22, 2021, file photo, Denver Broncos general manager George Paton speaks during a news conference at the NFL football team's headquarters in Englewood, Colo. Paton spent his first few months as John Elway's successor reconstructing the Broncos' gutted secondary and reinforcing Denver's overall defense. What he hasn't addressed is the franchise's biggest bugaboo — quarterback — after declaring last month “we want to bring in competition” for Drew Lock, whose 15 interceptions in 13 games tied for the league lead in 2020. (AP Photo/David Zalubowski, File)

With the NFL draft quickly approaching, several teams hope to land a franchise quarterback, the Denver Broncos among those.

The Broncos have a promising option in Drew Lock, but the quarterback talent in this draft may be too enticing to pass up.

Denver has the ninth overall pick in the draft. They have many options with that pick, whether they want to trade up for a great quarterback or sit on it and see who’s available.

Expect the elite prospects like Trevor Lawrence and Zach Wilson to go first. This would still leave Denver with some nice options, including Justin Fields, Trey Lance and Mac Jones. But Denver may be too optimistic if they think more than one of those guys will be available by the ninth pick.

Right now, the starting quarterback for Denver is Drew Lock. After a prolific career at Missouri, Lock joined the Broncos and is awaiting his breakout season. A high-risk, high-reward quarterback, Lock has the potential to become a talented passer in the NFL, but that’s if he ever breaks out.

Broncos GM George Paton spoke about the team’s options at quarterback, voicing his support for Lock and his hard work. But Paton did not rule out the team drafting a quarterback with their first round pick.

Lock hasn’t put up the most appealing stats, but his commitment to developing his game is a good sign for the franchise. Whatever the imminent plans are at quarterback for Denver, expect Lock to be in competition for the starting spot.

Options in the Draft

If Denver holds the ninth pick and doesn’t trade higher, they may not get the quarterback they want and may settle for another position. Whether or not they trade up for a pick is largely dependent on who the 49ers take with the third pick.

Denver is interested in the two primary dual-threat prospects: Lance and Fields. If the 49ers decide that Mac Jones is their next quarterback, Denver may jump up to take one of the other two. Broncos GM Paton discussed the similarities between Lance and Fields.

Paton seems to be satisfied with where the Broncos are currently picking. As stated, there’s a lot of variety available with that ninth pick, and Paton seems sure that Denver will walk away with the best player available when they pick.