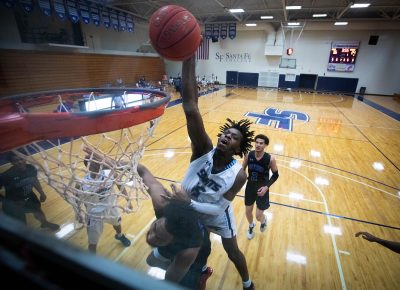 At first, it seemed like it would be a short pause for the Santa Fe Saints sports teams. Then it became clear no sports would be played for a long time. March 2020 was a really difficult month for everyone and Santa Fe athletics was no exception. The NJCAA canceled the state and national basketball tournaments, and the baseball and softball teams had their games canceled about 20 games in.

Athletic director Jim Keites talked about that time in March. “At first I think we got the feeling it was not going to last. It was just a pause and then we would be back out there, but it became obvious a week or so in on a national, really a worldwide level, it started to spread so much that we were in for the long hall and we would not see the fields again in the spring.

Saints Women’s basketball coach Chanda Stebbins said, “I think people anticipated maybe being home for a week or two, and then when it went on into the summer, I think people moved home and learned how to operate virtually.

“I was kind like wow our season just ended, and then everybody’s season ended. That was a surprise and I think our players were surprised as well,” coach Stebbins said.

Keites talked about how tough the summer of 2020 was for the athletics department.

Keites went on to talk about what he did to start the process of bringing people back to the Santa Fe campus.

Some of the key players on the committee Keites mentioned: the vice president of student affairs, the team doctors, people in facilities, the people who deal with travel and safety people.

As everyone returned to campus, attention shifted from how to play, to when to play games. Volleyball, usually a fall sport, was moved to January 2021. Also, both men’s and women’s basketball were moved from their usual start time in November to January.

The Saints put protocols in place and the season was scheduled to begin in January.

Chris Mowry, Saints men’s basketball coach, said, “Definitely the longest year we ever had.” Santa Fe was allowed to practice in the fall in preparation for the 2021 season. Coach Mowry explains.

All Saints sports teams had to deal with at least one cancelation in the 2021 season. Also, several games were postponed and played later. The schedule for everyone seemed to always be shuffling around.

The Saints had one game get canceled in volleyball this season. Keites said volleyball coach Nick Cheronis was not going to let a global pandemic keep his team from playing at a high level. Coach Cheronis had all his players wear masks during practice and even games. The Saints volleyball team ended up winning their conference championship this season.

No. 15 @SFsaintsvball Run Concludes in Five-Sets with No. 8 Polk State

Saints baseball and softball are still playing in their season. Both teams are hoping for conference championships of their own.

Softball Gets Past St. Johns River with Dominant Pitching Performances

Both men’s and women’s basketball had to go on pause this season.

“We played nine games in about three weeks, Coach Mowry said. “Then we had Covid issues and were shut down for about three weeks. Then we played 11 games in 24 days. So from the time we finished our ninth game to the end of the season, we had three practices with everybody available…there was very little time to develop and work on things after we got shut down.”

“I just coached a lot different when we were coming on a shut down you’re so concerned about injuries,” Coach Stebbins said. Because you’ve got kids that haven’t done anything. I was tentative as a coach to push them too much.”

The Santa Fe women’s basketball team fought through the tough season that was 2021 and finished 5-15. The men’s team was 9-11 but finished the year winning 4 of their last 5.

The hope is things get back to normal soon. Everyone inside the Saints athletics program is cautiously optimistic things will get somewhere close to normal again going into next fall’s sports.