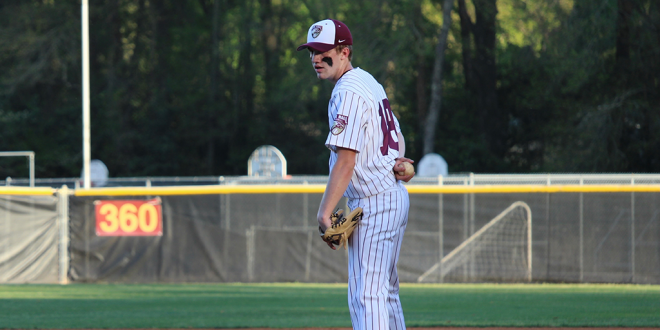 When one door closes, another door opens.

This is the case for Matthew Leber. The end of his time at Oak Hall High School is approaching fast.

Matthew is called a “lifer” at Oak Hall, having attended since kindergarten.

Growing Up With the Love For America’s Favorite Pastime

Matthew’s Father, Chris Leber, introduced baseball to all three of his sons.

Going to Ray’s Games was a tradition in the Leber family.

However, Mr. Leber instilled in his children at a young age that baseball has more life lessons than one might think.

“You learn to be disciplined, set a goal out there and get to it,” he said. “That’s one of the many lessons you take away from this sport.”

Not only has his Father been an inspiration to his life, but his Mother has as well.

She never misses a game.

Matthew said both of his parents were equally the most influential people in his life.

Career as an Eagle

During his time at Oak Hall, he has been a key player for the Oak Hall Eagles varsity baseball team playing various positions such as pitcher, outfielder and second baseman.

Matthew has played baseball at Oak Hall since he was in sixth grade.

Head Coach, Kevin Maris returned to coaching at Oak Hall last year, and he was Matthew’s Travel Team coach for the Florida Hardballers.

When asked about his time coaching Matthew throughout the year’s Coach Maris said,

“Matt’s done good, he’s worked hard and improved every summer I coached him, and now he is putting together a nice senior season. I saw him when he was at a young age, and now he’s matured a lot over the last couple of years. Now he’s playing like a senior should play.”

Coach Maris encourages his players to be as successful in the classroom as they are on the field.

When we talked about Matthew’s future plans, Maris said,

“I’m proud of how he’s worked hard to get to this point.”

Matthew has also been acknowledged for his talent on the field. Last year he won the best pitching award for his team. 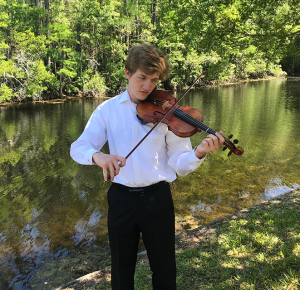 Not only is Matthew great on the field, but he also has several other talents and passions.

He is a successful member of the school orchestra, winning state championships for violin several times.

Not only is he a musician and athlete; he is also quite the artist and scholar.

He credits the skills he’s learned in sports that have allowed him to manage and balance time in order to be so well-rounded.

He said sports have helped him with time management and he will always be thankful for learning such an important skill so young.

What you put into something is what you get out.

This past February, Matthew learned that he got accepted into the University of Florida.

He decided to accept and put baseball behind him instead of playing at a junior college or going division three.

At UF, Matthew plans to study either biology and go into the pre-med track, where he would ultimately want to study sports medicine.

However, he is also interested in studying journalism and specializing in sports media.

Matthew mentioned that he would love to be a sports writer and sit courtside at games; that way, sports can always be a part of his life.

Aside from attending one of the highest-ranked public universities in the country, he also chose UF to be close to his family.

Having grown up in Gainesville, it felt like the right fit.

His father could not be more thrilled that his son is now going to his alma mater.  “Now that he got in, the legacy goes on,” he said. 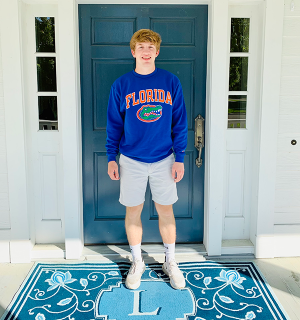 Even though he won’t be playing baseball on his school’s team anymore. He has learned precious lessons.

“I think baseball teaches you a lot about life and that it’s a game of failure, and even though my baseball career will be cut short after this year. I can take the lessons I learned from it in other aspects of life. I think that’s really beneficial for sure,” Matthew said.

His supportive parents couldn’t be happier with his decision and what his future will look like.

“I always told him, look, there’s going to be a day when you can’t play anymore. Whether you’re not good enough or you’re pursuing your life or career, very few make it up to the top. But you can always enjoy it. You can always watch it,” Leber said.

Matthew also has thoughts about returning to Oak Hall next year to help coach.

As his time playing baseball as an Eagle comes to a close, the memories and lessons he learned from this sport will last a lifetime.

Previous FEATURE: A look inside the Santa Fe Saints athletics program over the last year
Next FEATURE: A Glance at Noah Hayse’s Experience Committing to UCF as a Freshman