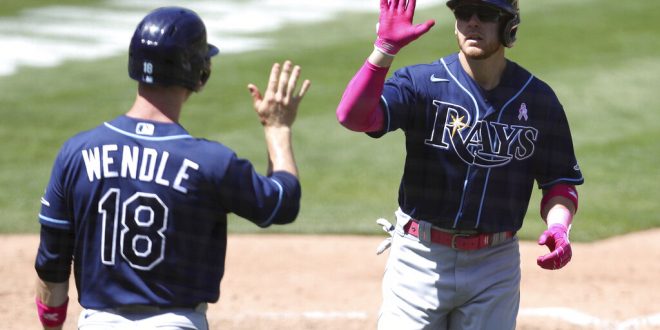 Tampa Bay Rays' Mike Brosseau, right, is congratulated by teammate Joey Wendle after hitting a solo home run against the Oakland Athletics during the sixth inning of a baseball game in Oakland, Calif., Sunday, May 9, 2021. (AP Photo/Jed Jacobsohn)

The Miami Marlins take the diamond for Game 2 of their series with the Arizona Diamondbacks.

The Rays welcome AL East rival New York to Tampa Bay for a three-game stint. The Rays and Yankees have already met in two series this season. Tampa Bay claimed both winning five out of the six matchups.

The Yankees enter tonight’s game fresh off of a series win over the Washington Nationals. The Yanks are also getting first baseman Luke Voit back after spending 10 days on the injured list due to a knee injury. He’ll be expected to boost the New York offense alongside Giancarlo Staton who leads the Yankees in RBIs (24) and home runs (nine).

Prior to tonight’s game, the Yankees returned from rehab and reinstated INF Luke Voit (#59) from the 10-day injured list.

Tampa Bay has seen nothing but success against the Yankees this season. Despite coming off a series loss to the Oakland Athletics, the Rays were on a five game win streak prior. The Tampa Bay offense got the best of New York in their last few meetings. The bats of Joey Wendle and Austin Meadows will likely be the key for Tampa Bay.

The Diamondbacks got the best of the Marlins in Game 1 of their four-game series. Arizona took a 5-0 lead by the end of the fifth inning. However, the Marlins remained scoreless until the top of the eighth when Jesus Aguilar scored their only two runs of the game on an RBI home run.

Prior to last night, the Marlins had won three straight against the Diamondbacks.

Arizona’s David Peralta and Asdrubal Cabrera showed up at the plate for the D-backs on Monday. Peralta leads the team in hits (33) and RBIs (24) and should be a constant factor throughout the next three games.

The Miami offense was slow at bat on Monday night. They’ll look to turn it around behind the bats of Aguilar and Adam Duvall.