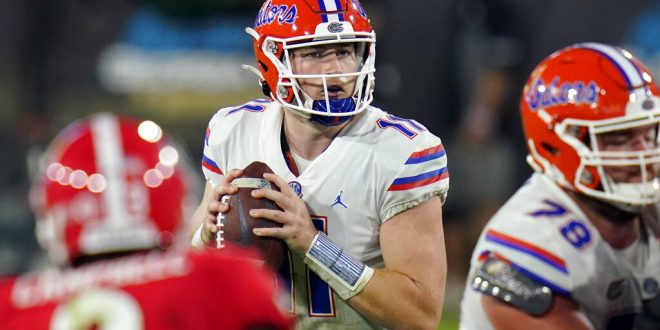 Former Gator and current Tampa Bay Buccaneers quarterback, Kyle Trask, talks about the opportunity to play in the NFL behind the legendary quarterback, Tom Brady. Trask, who only has two years of college football experience, has shown his perseverance to make it this far.

Above all, he showed how far patience and discipline can take you.

During his college career, Trask led the Florida Gators to the SEC Championship in 2020. Through his hard work and resilience, Trask will have the opportunity to learn and play behind one of the best quarterbacks.

The Bucs possess a great run defense and also led the NFL in their run defense this year. Trask knows he in good hands after his experiences with the defenses at Florida.

Trask’s goal is to be the successor to Tom Brady and the next quarterback in the Bucs.

“I definitely had a feeling that they were interested. As far as my feelings right now, it is totally surreal for me and I am just trying to soak it all in and enjoy the moment,” Trask said.

Trask believes that trusting in himself and in the Bucs program will help him succeed in the NFL. He enters with two years of experience under his belt from his time at Florida. Now, he brings that experience to the backup role behind Brady.

“They are going to get everything I’ve got,” Trask said.

Having the Right Mindset

With Kyle Trask’s trusting in his ability and skill performance, he knows the expectations for himself and where he stands as he makes this next step in his career.

“I had some great conversations with a lot of the offensive coaches from the Buccaneers so towards the end of the round when their picks were coming up,” Trask said. “I always figured there was some potential there and luckily they believed in me enough to give me this opportunity.”

With Brady being one of Trask’s childhood quarterbacks that he looked up to, Trask is ready for his moment to do whatever he can to help this team.