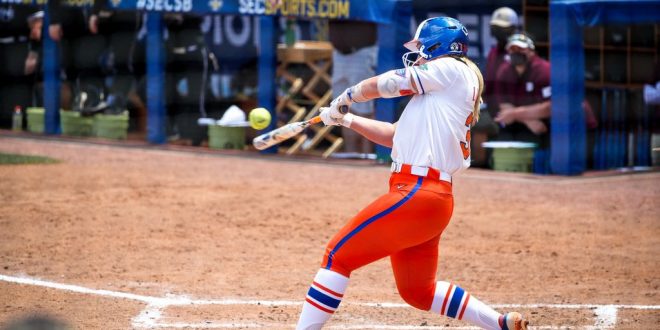 Kendyl Lindaman, Charla Echols, Hannah Adams; these are starting to be household names in Gainesville. In fact, it seems to be expected that when Florida falls behind, their star names carry them out.

On Thursday afternoon, the Gators fell behind early. In step Kendyl Lindaman and Charla Echols. The two transfers blasted three-run home runs in the fifth and sixth innings respectively.

There may not be an ace on this Florida Gators team, but there are a handful of great pitchers. Starter Elizabeth Hightower did not have her best stuff on the day. Three hits over four innings is nothing bad, but the Bulldogs took advantage.

A two-run double off the bat of Paige Cook broke the deadlock. Furthermore, the two runs allowed Mississippi State to plate their first runs against the Gators in their fourth game trying. In their three-game season series, Florida outscored MSU 19-0, including two wins from Hightower.

It would not be until the fifth inning when the Gators responded. With Emily Wilkie and Charla Echols on second and third with one out, Kendyl Lindaman thumped a ball over the fence in right field.

Lindaman, a senior playing in her final SEC tournament, brought her career home run total to 69.

The Gators established a 3-2 lead in the fifth frame after four innings with two hits.

With Lugo now in the game, head coach Tim Walton would be looking for more runs to build off the blast from Lindaman. In her normal way, it was the batter just before Lindaman to put more runs on the board.

Charla Echols, who batted third on the lineup card, also had two runners aboard, this time with two outs in the sixth. Echols lifted the second pitch in the at-bat into right-center field.

Next up, the Gators will face the No. 4 seed in the SEC, Missouri.

The final score would sit at 6-2, but it does not tell the whole story of how the Gators were unable to get their bats going until late. Unfortunately for Gator fans who like comfortable wins, Tim Walton’s Gators make comebacks a common occurrence.

This is Florida’s 11th comeback win this season, with six of those 11 being walk-off winners. The usual suspects are Charla Echols and Hannah Adams. However, the depth of this lineup speaks volumes. Kendyl Lindaman delivered in the clutch on Thursday, Julia Cottrill clinched the No. 1 seed in the SEC tournament and other Gators put these stars in positions to thrive.

The road gets no easier after this win. In fact, Florida now takes on a Missouri team that required a late hero. Then, it was Hannah Adams delivering a three-run homer in the seventh inning to clinch another SEC series in favor of the Gators.

The Florida-Missouri matchup begins at 4 p.m. on ESPN2.

Originally from Seminole in the Tampa Bay area, Kyle is a contributor for ESPN Gainesville as well as local NPR and PBS affiliate WUFT. Kyle wants to get into sports with a lofty dream of being a sports broadcaster. He was raised playing soccer and baseball while watching hockey and football, so the knowledge about various sports is fairly extensive.
@KyleFanslerUF
Previous Heat’s Udonis Haslem Ejected in his 2021 Season Debut
Next Kyle Trask Ready for Time With the Bucs