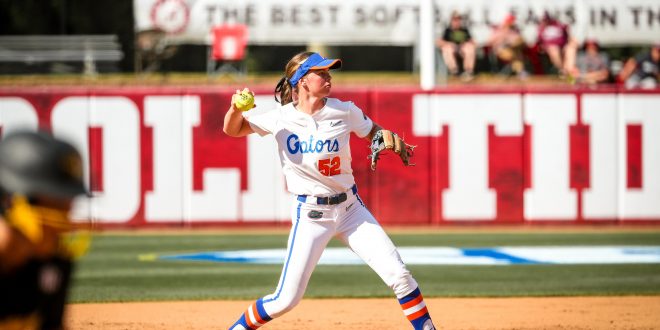 Get to Know the Teams in the Gainesville Softball Regional

Bulls softball head coach Ken Eriksen said he thinks it helps that his team has played the Gators so much this season because it’s decent competition. He added that South Florida’s pitcher, Georgina Corrick, is basically their team.

Corrick has had a great season. This season alone, she has 300 strikeouts, the most in her career. She had a game-high number of strikeouts in USF’s game against Florida Atlantic on Feb. 28 with 17 strikeouts. She will prove to be a challenge for Florida’s offense.

The Bears are 27-21 overall this season and 8-9 in their conference. Baylor outfielder Lou Gilbert holds a few of the team’s highs in batting, with a .336 batting average, 50 hits, tied at 35 runs scored with Emily Hott and triple tied at five home runs with teammates Aliyah Binford and Goose McGlaun, per Baylor.

This team’s strength is their heart, said Baylor softball head coach Glenn Moore. The team has faced a lot of adversity this season after assistant coach Mark Lumley died on Dec. 27 after fighting cancer for the fourth time.

The Jaguars are 30-19 overall this season and 13-9 in their conference. Two team leaders include junior Kamdyn Kvistad with 10 home runs, and outfielder Mackenzie Brasher has 27 runs scored with a .374 batting average, according to South Alabama.

South Alabama began this season with a lot of newbies, including freshman and transfers, said South Alabama’s head coach Becky Clark. While the start of the season had ups and downs, Clark said as the season continued, it started to click.

As for their gameplay, the team tended to try to do too much early on, but now the team works together with more with a focus on quality at-bat, Clark said.

We will see how all these Gainesville regional teams compete in today’s games.

Kaitlyn Wadulack is a third-year journalism student specializing in sports and media at the University of Florida. You can reach Kaitlyn at k.wadulack@ufl.edu
Previous Lightning Drop Game Three, Still Lead Series
Next Pat Dooley’s Front Nine May 21

March Madness is upon us, and on Friday the first round matchups of the Women’s …