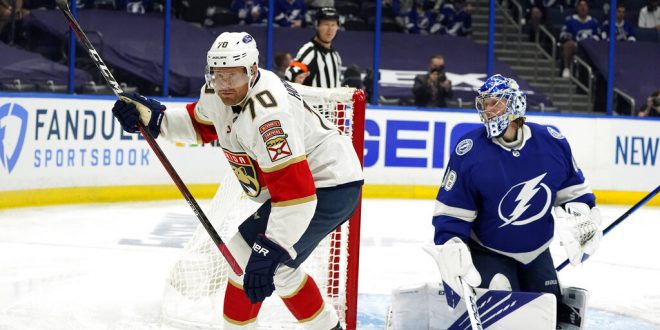 No, one truly expected a sweep at the beginning of the series. But, the chance was there to do, and the Tampa Bay Lightning let it slip.

The Bolts in overtime to the Florida Panthers 6-5 to lose game three. They still lead the series 2-1.

Game three had similar vibes to the opening game of the series. This time, however, the Bolts saw a lead vanish late.

The Panthers got off to a 2-0 start in the first period.

Sam Bennet knocks a pass in from Jonathan Huberdeau to score the first goal 4:31 into the game. Minutes later, former Bolts defenseman Radko Gudas got a wrist shot past goalie Andrei Vasilevskiy to make it 2-0.

The Bolts go scoreless in the first period.

In the first nine minutes of the second period, the Bolts roared back to go up 3-2. Anthony Cirelli, Ross Colton and captain Steven Stamkos scored unanswered goals to get the Lightning the lead.

Alex Wennberg scored a power-play goal for Florida to tie back up.

Then, toward the end of the period, Brayden Point and Alex Killorn scored for Tampa Bay to take a 5-3 lead into the second intermission.

Failing to Kill the Clock

The Bolts came back out on the ice with a new game plan. They took their foot off the gas pedal and chose to try and play kill the clock rather and really to put the game away.

This relaxed played allowed Florida to get back in it. A goal by Patric Hornqvist woke the Lightning back up, but they couldn’t get going again. Gustav Forsling tied it up with less than four minutes to go, and this game went to overtime.

The Lightning even entered overtime on the powerplay. They could not capitalize. After the power play ended, they found themselves quickly trapped on their side of the ice.

Then, they find themselves on the offense, and they win the faceoff. But as soon as the faceoff is complete, the Bolts lost the puck and Ryan Lomberg took it across the ice on a breakaway and score an easy goal for Florida to win the game, 6-5.

The Bolts look to take a commanding lead in the series in game four. Defenseman Victor Hedman said what matters now is how the team responds as a group to the loss.

On the loss: "It's how you respond as a group. We look forward to the next game to get back on track." #FLAvsTBL

Puck drop at Amalie Arena is set for 12:30 p.m. This game will air on Bally Sports Sun, Bally Sports Florida and CNBC.

Harrison is a sports coordinator at ESPN 98.1 FM/850 AM WRUF. He served as a beat writer for Florida Gators football for the 2019 and 2020 seasons. He also contributes to WRUF's Gainesville Sports Center segments and makes appearances on the Clash on Harp on Sports. Harrison has been a content writer for WRUF since January 2019 as well.
@HarrisonSmaj
Previous Former Gator Shawn Davis brings versatility to Colts’ secondary
Next Get to Know the Teams in the Gainesville Softball Regional