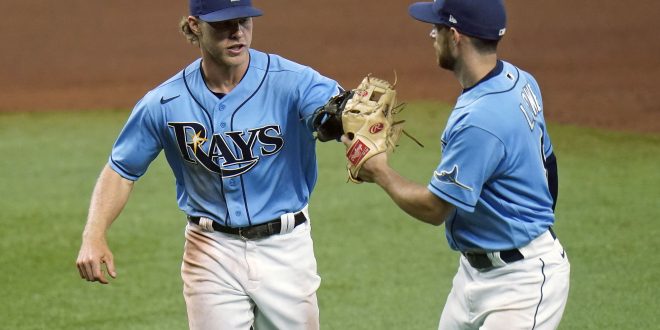 Rays Look to Even Series with the Royals

The Tampa Bay Rays host the Kansas City Royals in the second of their three-game series Wednesday night. The teams are meeting for the second to last this season at 7:10 p.m. on Tropicana field.

In Wednesday night’s contest, ace right-hander Tyler Glasnow is set to start for the Rays. He is 4-2 and posted a 2.90 ERA with 87 strikeouts in 62 innings pitched and 10 game starts this season. This will be Glasnow’s first time facing the Royals this year.

Glasnow had an awkward start in the four-game series with Toronto over the weekend. He surrendered five runs in 4 2/3 innings against the Blue Jays.

Meanwhile, the Royals will be sending out Mike Minor to start on the mound. In his appearance against Detroit, Minor gave up four runs on ten hits in six innings. He has posted a 5.14 ERA with 52 strikeouts in 49 innings pitched and nine game starts so far this season.

The defending American League champion Rays have been on a roll this season. They posted an 11-game win streak entering their series with the Royals, which is the second-longest in the club’s history.

In Tuesday night’s matchup, Rich Hill came out strong for the Rays striking out a career-high 13. Hill has a 3.63 ERA with 58 strikeouts in 52 innings pitched just this season.

Rays’ Brett Phillips had a night with a single off the Rays’ third that went off Keller’s glove, stole second, and scored on a hit by Yandy Diaz. Kevin Cash, Tampa Bay baseball manager, talked on how Phillips played a catalyst for the Rays in Tuesday night’s performance.

But following a wimper ninth inning, Phillips commented on how the energy in the dugout never dimmed.

To say Tampa Bay has been on fire this season would be an understatement. However, the Rays’ 11-game win streak came to an end Tuesday night. Royals’ Salvador Perez hit a tiebreaking RBI on a single in the sixth inning of the matchup.

On the other hand, Kansas City entered the series coming off a series win against the Milwaukee Brewers and Detroit Tigers last week.

As for Wednesday night’s contest, the Rays are looking to get back into the win column. With their top starter back on the mound to open the second game of the series, Tampa Bay is looking to his starter rebound after his season-worst outing Tuesday.

Tori Edwards is a fourth-year Telecommunications student specializing in News with an outside concentration in Sport Management. Tori works as an author and reporter for WRUF.com and is the voice of trendings on Monday afternoons on ESPN 98.1 FM - 850 AM WRUF. You can reach Tori at victoriaedwards@ufl.edu.
@ToriEdwardsNews
Previous Gators Take No Mercy
Next SEC Tournament Wednesday Round Up