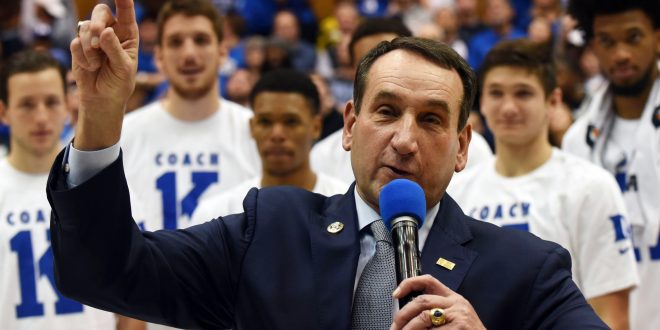 Coach K has built an unrepeatable resume in his 41 seasons as a Blue Devils coach. The 74-year-old began his collegiate coaching career for Duke in 1980. Since then, he has led the Blue Devils to 12 Final Four appearances, 12 Atlantic Coast Conference regular-season titles, 15 ACC tournament championships and five national championships, per ESPN. He has a 1,170-361 record overall, the most career wins in NCAA history; this includes his 1,097-302 mark at Duke, the most wins in NCAA history at one school. He also went off to produce six gold medals as the head coach of the U.S. Men’s National Team, according to Duke.

If that wasn’t enough, he produced a total of 28 NBA lottery picks, the most in NBA Draft history. His impeccable career has left him with three National Coach of the Year titles.

What a career for Mike Krzyzewski.https://t.co/WsqeWj2Bik

Jay Bilas, who played for Coach K from 1982 to 1986 and was his assistant coach from 1990 to 1992, said Krzyzewski’s retirement marks the end of the most successful era in men’s college basketball.

The now ESPN analyst said that to a lot of people, Krzyzewski is Duke.

While this will be a tough coaching act to follow, Duke has already named associate head coach Jon Scheyer as Krzyzewski’s successor. Scheyer, who also played for Krzyzewski from 2006 to 2010, will take the reins after the 2021-2022 season.

Scheyer was a great player at Duke and helped win the national championship as captain in 2010, Bilas said. He added that Scheyer’s done an excellent job as associate head coach under Coach K.

The program will be left in very capable hands as this is a logical next step Duke made, Bilas said. His experience as a player and coach leaves him knowing the program backward and forward.

The end is near, but Coach K’s memorable impact will never be forgotten.

Kaitlyn Wadulack is a third-year journalism student specializing in sports and media at the University of Florida. You can reach Kaitlyn at k.wadulack@ufl.edu
Previous SEC well-represented in 2021 Softball World Series
Next Lightning Take Game 3 with 2-0 Lead Over Carolina Hurricanes