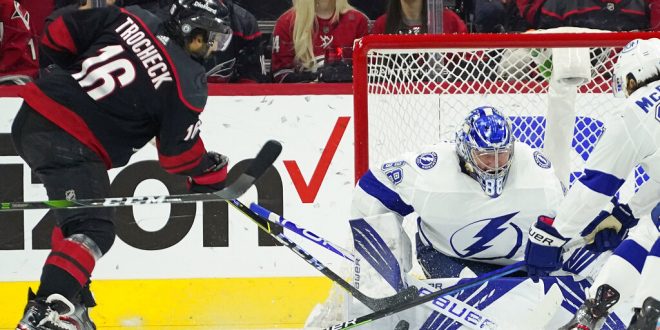 The Tampa Bay Lightning and Carolina Hurricanes take the ice for Game 3 of their Round 2 Stanley Cup Playoff series. Tampa Bay enters Game 3 with a 2-0 series lead over Carolina after back-to-back 2-1 wins.

The reigning Stanley Cup Champions have played some of their best hockey this postseason.

A major key for the Lightning is star goal Andrei Vasilevskiy who has been nearly unstoppable at the net. The seven year veteran holds the second highest postseason save percentage with .939 and ties at first for most postseason wins (6). Vasilevskiy comes in just below Colorado’s Philipp Grubauer.

The Bolts gave up quite a bit of postseason points (13) in Round 1 against a strong offensive team in the Florida Panthers. However, Tampa Bay has found a way to contain the Carolina offensive.  Vasilevskiy and the Lightning held the Hurricanes to two goals despite Carolina’s 70 shots in Games 1 and 2.

The Lightning offense contains serious depth and it reflects on the scoreboard. The return of Nikita Kucherov has made a notable difference for Tampa Bay. He leads the team with a total 12 points in addition to three goals in the postseason.

The Lightning’s explosive offense can partial contributed to Brayden Point and Alex Killorn. They each lead the Lightning with five goals each in the postseason.

Notables for the Hurricanes

Despite the Lightning holding the advantage statistically, the Hurricanes are playing great hockey. Carolina’s defense has managed to keep up with an explosive Lightning offense, holding them to four goals through two games.

Heading the Hurricanes defense is Jaccob Slavin and Dougie Hamilton. Slavin and Hamilton each record three assists through the postseason.

This is a ridiculous play by the best defenseman in hockey pic.twitter.com/aRX6LgLUVo

However, the Hurricanes are making some adjustments at the net in hopes of a new outcome. Goalie Petr Mrazek will make his first postseason start in Game 3, replacing Alex Nedeljkovic. Mrazek appeared in 12 games this season, recording a .923 save percentage during the regular season.

The puck hits the ice Wednesday night at 8:00 p.m. at Amalie Arena.