No. 3 seed Alabama will be representing the SEC as they are in the hunt for a national title. After sweeping Kentucky in the NCAA Super Regional, Alabama will be making their 13th appearance in the WCWS. Prior to that, they earned three shutout wins in the NCAA Tuscaloosa Regional.

The Crimson Tide is set to face off with Arizona in game three of the first round. The teams have met four times across the 2019 and 2020 seasons, each team walking away with two wins.

This season, Alabama has been successful in shutting down teams through their stellar pitching that holds opponents to a .191 batting average. In addition, the team has posted a 1.69 ERA thanks to ace pitcher Montana Fouts (25-3). After pitching 196.2 innings this season, she has posted a 1.49 ERA and 314 strikeouts.

Fouts will face Arizona’s star catcher Dejah Mulipola, who has been named a first-team All-American and the NFCA Catcher of the Year. Mulipola is hitting a career-high .401 with 21 home runs, 63 RBIs, and a .906 hitting percentage.

Per their past contests, the Crimson Tide holds an edge in runs, errors, extra-base hits, and walks over the Wildcats. Meanwhile, Arizona leads 25-23 in hits and 34-28 in strikeouts over Alabama.

Georgia also in the hunt

Likewise, the Georgia Bulldogs will also represent the SEC in the 2021 Women’s College World Series.

As for Georgia, 2021 will be the program’s fifth appearance in the WCWS. They punched their ticket to OKC after sweeping Florida out of the Super Regionals.

Georgia’s Mary Wilson Avant made history in the Gainesville Super Regional after becoming the first in program history to pitch back-to-back shutouts in postseason play. The graduate pitcher stunned as she tossed all 14 innings without allowing a run against the Gators.

The unseeded Bulldogs will open play in game two of round one against No. 5 seed Oklahoma State. Georgia trails the all-time series with OSU 2-3.

The Bulldogs offense is led by slugger Lacey Fincher who has a batting average of .338 and 15 home runs. On the other hand, Oklahoma State’s ace Carrie Eberle will be key for the Cowgirls in their hunt for a national title. In the circle, Eberle (25-3) has a 1.41 ERA and 153 strikeouts after 178.2 innings pitched.

As the 2021 WCWS approaches, the series is scheduled to open tournament play Thursday.

For round one, No. 1 seed Oklahoma will open against James Madison at noon. After that, Georgia will face off with Oklahoma State at 2:30 p.m. for game two.

Next, the Crimson Tide takes on Arizona in game three at 7 p.m. Finally, Florida State goes head-to-head with UCLA at 9 p.m.

Tori Edwards is a fourth-year Telecommunications student specializing in News with an outside concentration in Sport Management. Tori works as an author and reporter for WRUF.com and is the voice of trendings on Monday afternoons on ESPN 98.1 FM - 850 AM WRUF. You can reach Tori at victoriaedwards@ufl.edu.
@ToriEdwardsNews
Previous Rays Look For Another Win in New York
Next Coach Mike Krzyzewski is set to retire after upcoming season 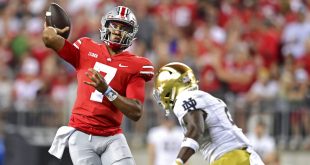