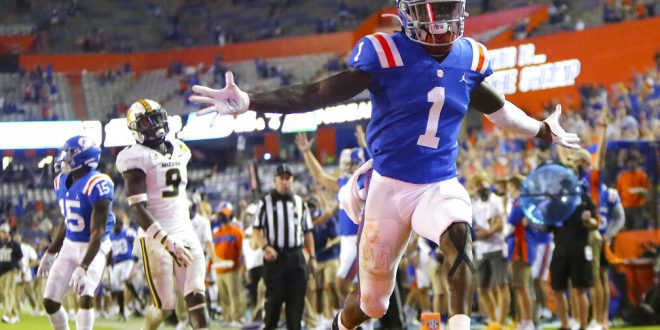 FILE - Florida receiver Kadarius Toney (1) celebrates a touchdown against Missouri during an NCAA college football game in Gainesville, Fla., in this Saturday, Oct. 31, 2020, file photo. No. 6 Florida doesn't really even try to run the ball anymore. There's an occasional handoff here and there, but the Gators are mostly one-dimensional _ and that's fine with coach Dan Mullen, Heisman Trophy front-runner Kyle Trask and arguably the deepest receiving corps in the country.(Brad McClenny/The Gainesville Sun via AP, File)

Former University of Florida wide receiver Kadarius Toney is making strides in the NFL. He was drafted 20th overall in the 2021 NFL Draft first-round pick.

Road to the NFL

Toney played in 11 games during his senior season, completing 70 passes for 984 receiving yards and 10 receiving touchdowns. He also finished his final year with 14.1 yards per catch, 161 rushing yards and one rushing touchdown. He had success on the Florida special team as well, averaging 11.3 yards on 13 punt returns and 21.6 yards on 15 kickoff returns.

During 2020, he started all 11 games he appeared in with Florida.

He is currently participating in the Giant’s rookie minicamp. His special team’s experience at Florida is coming in handy. Special teams coach Thomas McGaughey discusses Toney’s acclimation to the pros.

“Right now he just has to get in here with all the rest of the rookies and get acclimated to what we do and how we do it,” McGaughey said. “You saw his tape in college. You know his ability and what he can do with the ball in his hands, but right now he just needs to get in here and gain the trust of his teammates. That job as a punt returner in this league, that’s a huge job and huge responsibility. That’s the main focus right now. He’s a good young player that needs to understand what it takes to be a pro, and you know, just learning how to operate as a pro. But he definitely does have extreme talent. We’ve all seen that.”

Head Coach Joe Judge said he is excited about working with the new talent.

Judge is hopeful that rookie camp can prepare the new players before the off weeks heading into training camp.

New York Giants’ quarterback Daniel Jones was drafted in the first round in the 2019 NFL Draft. After Tuesday’s minicamp, Jones commented on the new WR.

“Yeah, I think he brings a lot to the table and what he can do, he’s a real twitchy and explosive athlete,” Jones said, “and we will continue to work and get to know one another and help him understand what we’re doing on offense as he’s learning and continue to work with him.”

Sara Dastgerdi is a current student at the University of Florida.
Previous Winner-Take-All Game For Women’s College World Series
Next Nuggets-Suns, Nets-Bucks Among Conference Semifinal Matchups