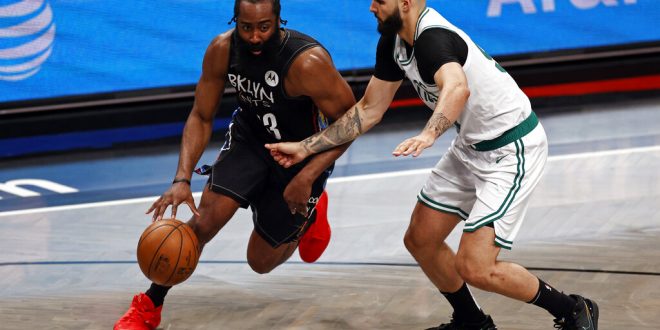 The Brooklyn Nets will try to clinch the series against the Milwaukee Bucks tonight in game six, as they are up 3-2 in the Playoff series.

The Nets will be without their All-Star guard Kyrie Irving as he will remain sidelined with a right ankle sprain, but star guard James Harden will return to the lineup to play in tonight’s critical game six. Brooklyn defeated the Bucks last game 114-108 with a 49-point game performance from Kevin Durant.

Durant and Harden will play a key factor in the Nets advancing to the Eastern Conference finals with a win tonight. Harden returning to the lineup will be a big boost for the team as he is averaging 24.6 points and averaging 8.5 rebounds. Durant averaged 33.1 points, 9.1 rebounds, 4.4 assists, 1.7 steals, and 1.8 blocks in the last 10 games for the Nets.

Brooklyn as a team is averaging 115 points, 42.6 rebounds, 23.4 assists, 7.0 steals, and 5.4 blocks per game while shooting 47.5% from the field. If the team can have an excellent performance on the offensive and defensive end, they should seal the deal by punching their ticket to the Eastern Conference Finals.

Milwaukee will need a strong performance from their stars and their bench in this stay-or-go-home matchup to try and force a game seven on the road. The Bucks are fourth in shooting in the NBA from deep at 38.9%. Center Bobby Portis leads shooting from 3-point range, shooting 47.1% from behind the arc.

Nobody said it's gonna be easy. pic.twitter.com/P8Go5lgZEG

The Bucks should lean on star power forward Giannis Antetokounmpo to lead the team to victory as last game he scored 34 points in their loss. Antetokounmpo is also averaging 28.1 points per game, 11.0 rebounds, and 5.9 assists. Small Forward Khris Middleton has averaged 19.5 points, 6.8 rebounds, and 3.6 assists in Milwaukee’s last 10 games.

The Bucks will try to force a game seven tonight. If not, the Nets will be advancing to the Eastern Conference Finals with a win tonight.