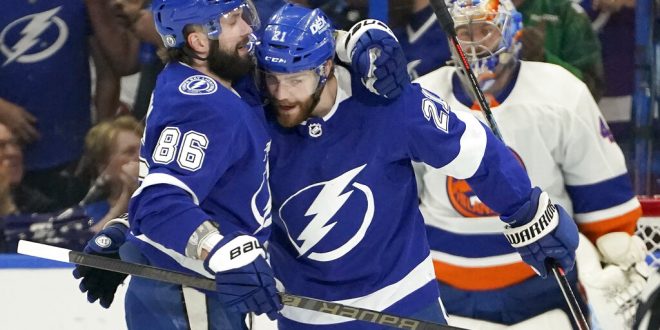 Three wins away. That’s how close, yet so far, the Tampa Bay Lightning are from returning to the Stanley Cup Final. A bounce-back in game two helped, but they can’t fall behind again.

After two games at Amalie Arena, the Lightning head to Nassau Coliseum. The Bolts haven’t lost the first two road games of a series yet this playoffs. Keep in mind, they started off 2-0 in the first two rounds, and they didn’t have home ice. So, the Bolts look to continue a trend. The Lightning are also 5-1 on the road in the playoffs, while the Islanders sit at 4-2 at home.

Without fail, fans can continue to keep an eye on goalie Andrei Vasilevskiy. Throughout the playoffs, Vasy has turned himself into a Conn Smythe favorite–this is the award for the playoff MVP. In 13 games, the big cat has a GAA of 2.21, a save percentage of .933 and two shutouts. These are his numbers despite a couple high-scoring games against the Panthers.

His performance also gave the world this glorious photo. And the internet is loving it.

Ok, back to real hockey talk.

Forward Brayden Point has been clutch against the Islanders dating back to last year’s conference finals. In six games, he has nine points (four goals, five assists).

Then, there’s Nikita Kucherov: zero regular season games played; but he’s dominating in this playoff. Kuch has racked up five goals and 17 assists for a total of 22 points (which is the most of anyone in the playoffs).

Meanwhile, the Islanders have two goalies to throw at the Lightning that will succeed. Semyon Varlamov and Ilya Sorokin are the Russian goalie duo that has yet to be beat this season. No, really. Sorokin picked up the four wins against Pittsburgh and Varlamov got the four wins against Boston. Both also saw action in game two.

The Bolts would be the first to do it.

On offense, Jean-Gabriel Pageau leads the Islanders in points with 13. Brock Nelson and Kyle Palmieri both lead the team in goals with seven apiece.

One thing is certain, and that’s neither team is going down without a fight–literally.

Harrison is a sports coordinator at ESPN 98.1 FM/850 AM WRUF. He served as a beat writer for Florida Gators football for the 2019 and 2020 seasons. He also contributes to WRUF's Gainesville Sports Center segments and makes appearances on the Clash on Harp on Sports. Harrison has been a content writer for WRUF since January 2019 as well.
@HarrisonSmaj
Previous 2021 U.S. Open preview
Next Gators Men’s Hoops Gains a New Coach