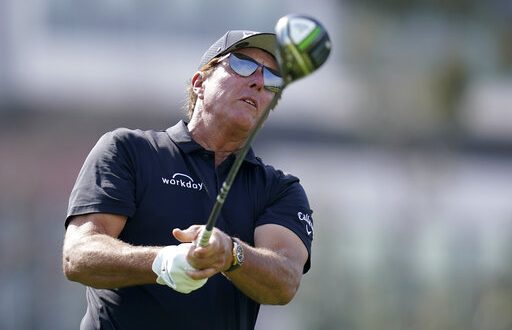 Phil Mickelson watches his tee shot on the 12th hole during a practice round of the U.S. Open Golf Championship Monday, June 14, 2021, at Torrey Pines Golf Course in San Diego. (AP Photo/Gregory Bull)

One of the toughest major championship golf tournaments is nearly underway. Some of the sport’s top players will tee up Thursday, June 17 for the 121st U.S. Open in La Jolla, California.

The closing hole at Torrey Pines

The U.S. Open returns to Torrey Pines for the first time since 2008 when Tiger Woods defeated Rocco Mediate in one of the most remarkable moments in the history of the sport. In the 2008 U.S. Open, Woods needed a birdie on the par-5 18th hole to match Mediate. From 12 feet, he lipped the putt in to force an 18-hole playoff. Woods then bested Mediate in an 18-hole playoff all while playing on one leg, marking one of his greatest triumphs.

This will also be a home game for reigning PGA Championship winner Phil Mickelson. At 50 years old, he recently became the oldest player to win a major. However, Mickelson faces the obstacle of not having easy access to the course as he’s had difficulty getting tee time. Nonetheless, the six-time Major winner is staying focused as he is eyeing a career Grand Slam with a win at the 2021 U.S. Open.

Fans have been hopeful for the pairing of Bryson DeChambeau and Brooks Koepka to play together in the first two rounds. However, the USGA announced the golfers will not be paired. Meanwhile, both DeChambeau and Koepka are among the favorites going into the tournament.

Defending his 2020 championship, DeChambeau spoke on the brewing rivalry and how he believes the feud with Koepka is purely for fun.

Although he finds the rift to be hilarious, he said he plans to focus on playing his game going into the U.S. Open.

Four-time Major winner Koepka also elaborated on the hot new rivalry and he agrees it is good for the game.

The four-day tournament will air all rounds on television between NBC and the Golf Channel.