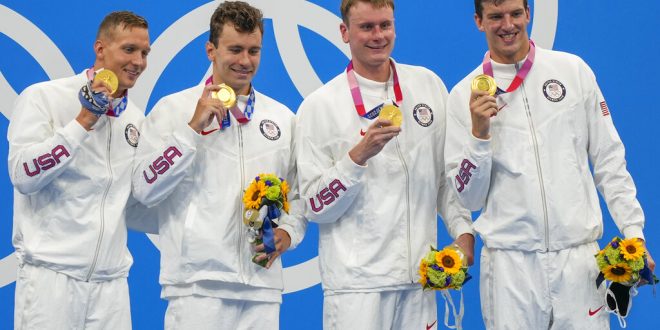 As the 2021 Tokyo Olympics began, the University of Florida has been very well represented. The Florida Gators have a total of 31 athletes from the past and present in the 2021 Olympics. Former Gators Caeleb Dressel and Kelsey Stewart have been leading the way for the Gators participating in this year’s Olympics. With a couple weeks left, it is already becoming clear who the standouts will be for the US Olympic teams.

Dressel Helps Dress the US

Entering the 2021 Tokyo Olympics, 28-time All-American Florida Gator swimmer Caeleb Dressel saw himself leading the US 4×100 team to a Gold Medal on Sunday night. Dressel helped snag the United States’ second 4x100m freestyle relay Gold Medal in a row. The US took home the gold at the 2016 Rio Olympics. Having won back-to-back gold medals in the 4x100m freestyle relay, the rest of the Olympic US swimming team has the bar raised pretty high.

Of the 31 Gators participating in the Olympics, one name that must be known is Kelsey Stewart. A standout in her time at the University of Florida, Kelsey Stewart continued to show up in big moments for US Softball. In an opening round matchup against Japan, Stewart drilled the first homerun for the US Softball team in Tokyo. Stewart’s shot to right field gave the US Softball team their biggest win the Olympics yet. On Tuesday, July, 27, 2021, the United States Softball team will face-off again against Japan in the Gold Medal Game for softball.

Get out of here ball! The first home run for @USASoftballWNT at #Tokyo2020 and it was a HUGE one by @stewartkels7!#OlympiansMadeHere x #GoGators

With all the Gators success in the 2021 Tokyo Olympics, it would be hard to overlook all the other hard-working American athletes. The US has already won a total of seven Gold Medals. Three Gold Medals in shooting events, two total swimming Gold Medals, and one Gold Medal in taekwondo and fencing. With a couple weeks left and the US second in total medals won, it will be interesting to see how well the US continues to do.