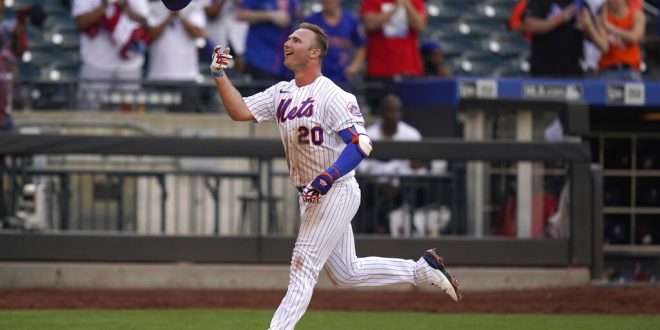 New York Mets' Pete Alonso reacts as he comes home after hitting a walk-off home run in the seventh inning of the second baseball game of their doubleheader against the Washington Nationals at Citi Field, Thursday, Aug. 12, 2021, in New York. The Mets defeated the Nationals 5-4. (AP Photo/Seth Wenig)

With the end of the MLB season on the horizon, now is a good time to start reflecting on what players and teams have had a successful 2021 campaign. Several former Gators players have been difference-makers for their teams, but these five, in particular, have shown the brightest.

It should be no surprise that the polar bear leads this list. The former National League Rookie of the Year is hitting with the same power that Mets fans have grown accustomed to seeing. He ranks second in the NL with 28 home runs, while adding 73 RBI. His batting average might not be what he or the Mets would like at .258, but his power at the plate helps to make up for it. After all, he became only the third player to repeat as the champion of the Home Run Derby this year.

Alonso won the NL Rookie of the Year award in 2019, and Jonathan India seems poised to take home the hardware this season. In his first season with the Cincinnati Reds, India is slashing a .287 average and a .387 OBP while racking up 16 home runs and 56 RBI. India took home NL Rookie of the Month in July, and he’s looking to become the second Gator in the past three years to win the ROY award. His main competition seems to be Miami Marlins pitcher Trevor Rogers. His 7-6 record might be a tad misleading, due to the Marlins’ struggles at the plate. Rogers is also posting a 2.45 ERA and a 1.12 WHIP, but he’s been out since July 31. Regardless of the award, India is having a stellar rookie campaign after shooting through the minor leagues in the past couple of years.

Since he entered the Major Leagues, Mike Zunino hasn’t been a great average batter. He hit .147 last year but helped carry the Rays to the World Series. This year is no exception with the catcher currently batting .209. And that number is higher than its typically been this season, as the slugger has been sitting below the Mendoza Line for much of the season. However, his 2.8 WAR ranks second on the Tampa Bay Rays, proving that he’s bringing value to the team in other ways. He’s slugging 26 home runs on 48 RBI, and he’s just coming off a stretch where he homered in five straight games. Look for Zunino to be a key piece if the Rays want to make a World Series push again in October.

DeSclafani only pitched one year with the Gators before getting drafted, but he donned the orange and blue nonetheless. The 31-year old starter is quietly having one of the best years of his career. With 11 wins and a 1.09 WHIP – both of which would be career highs – DeSclafani is having one of his best seasons in his first year with the Giants. It doesn’t hurt that Giants is currently the best team in the MLB and playing a caliber of baseball that San Francisco hasn’t seen in years. The Giants will need DeSclafani’s arm to stay strong if they want to ward off teams like the Dodgers and Brewers in the playoffs.

While Bader hasn’t had the season at the plate that he might have wanted, he’s proven to be a mainstay at center field for the Cardinals, coming up with dazzling play after dazzling play. In 64 games, Bader has notched 58 hits and 30 RBI. Bader is certainly still coming into his own at the plate, but the defense has always been there, as he seems destined to win a Golden Glove award sooner rather than later.

I'm a third-year student at the University of Florida passionate about storytelling and sportswriting. My goal is to work in communications for a professional sports team after I graduate.
Previous Two Gators to compete in U.S. Open Men’s Tennis
Next Former Gator Josh Evans Retires a Jaguar