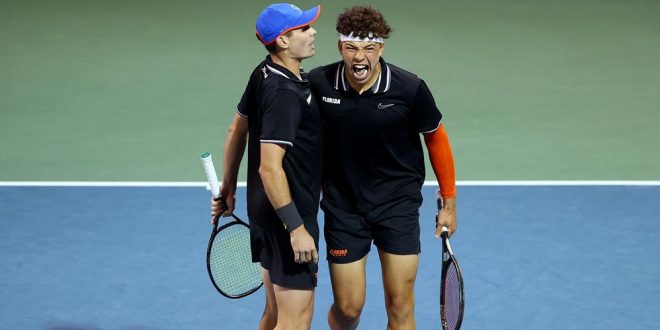 After winning the NCAA Singles Championship, Riffice earned a spot in the main draw. Shelton won in the doubles competition and finished second in singles at Zoo Nationals to earn his bid to the U.S. Open. Photo Credit: floridagators.com

Senior Sam Riffice and sophomore Ben Shelton will represent the Gators at the U.S. Open Men’s Tennis Championships. Competition will take place in Flushing, New York, from Aug. 24 to Sept. 12.

It was quite the season for both these players over the spring. Riffice was the Gators men’s tennis team’s captain and helped lead the program to its first national title with a 4-1 win over Baylor. He also won the 2021 NCAA Singles Championship as the No. 6 seed, which led him to a wild card bid into the main draw.

In his freshman season, Shelton clinched the national championship match for Florida and was named to the 2021 SEC All-Freshman Team with 10-2 record in conference singles play.

This isn’t the first U.S. Open Riffice has been to. In 2019, he competed in the men’s qualifying draw and also played a few times in the U.S. Open Boys Singles Championships. However, this will be his first time competing in the main draw.

“It’s pretty surreal,” Riffice said. “It really means a lot that they are giving me this wild card, and that they believe in me and think I can do well in the main draw. Being around all the other pros, having the best players in the world being there all in one place, is a really special feeling.”

For Shelton, this will be his first U.S. Open after receiving bids to both the main draw for doubles and qualifying draw for singles. Men’s tennis Head Coach Bryan Shelton said this is an opportunity that doesn’t have a price tag.

“Being able to soak in this environment and to get a real feeling of what it’s like to rub shoulders with the very best in the world… to see how they practice, practicing with them and to compete against them… there’s no better environment to be in,” Shelton said. “It’s a motivator, it’s something that validates all the hard work they already put in and it tells them that they are getting closer in narrowing the gaps.”

The Experience of a Lifetime

While the two players will both compete at the U.S. Open, Coach Shelton said that they will have a little bit of different experiences since Riffice has competed there before.

“It’s Ben’s first time in those ropes,” Shelton said. “Sam’s been inside those ropes before, so for him, it’s ‘let’s make sure we’re preparing ourselves as well as we possibly can and try to limit the amount of distractions. Let’s make sure we get the schedule set each day, get the practices we need to get in, let’s not stay at the site all day long and let’s attack this as if we’re a professional.”

Coach Shelton also offers words for Ben not only as his coach, but his father as well.

Kaitlyn Wadulack is a third-year journalism student specializing in sports and media at the University of Florida. You can reach Kaitlyn at k.wadulack@ufl.edu
Previous Saints Beat Jags to Cap NFL Preseason Week 2
Next Top Five Former Gators Players in the MLB