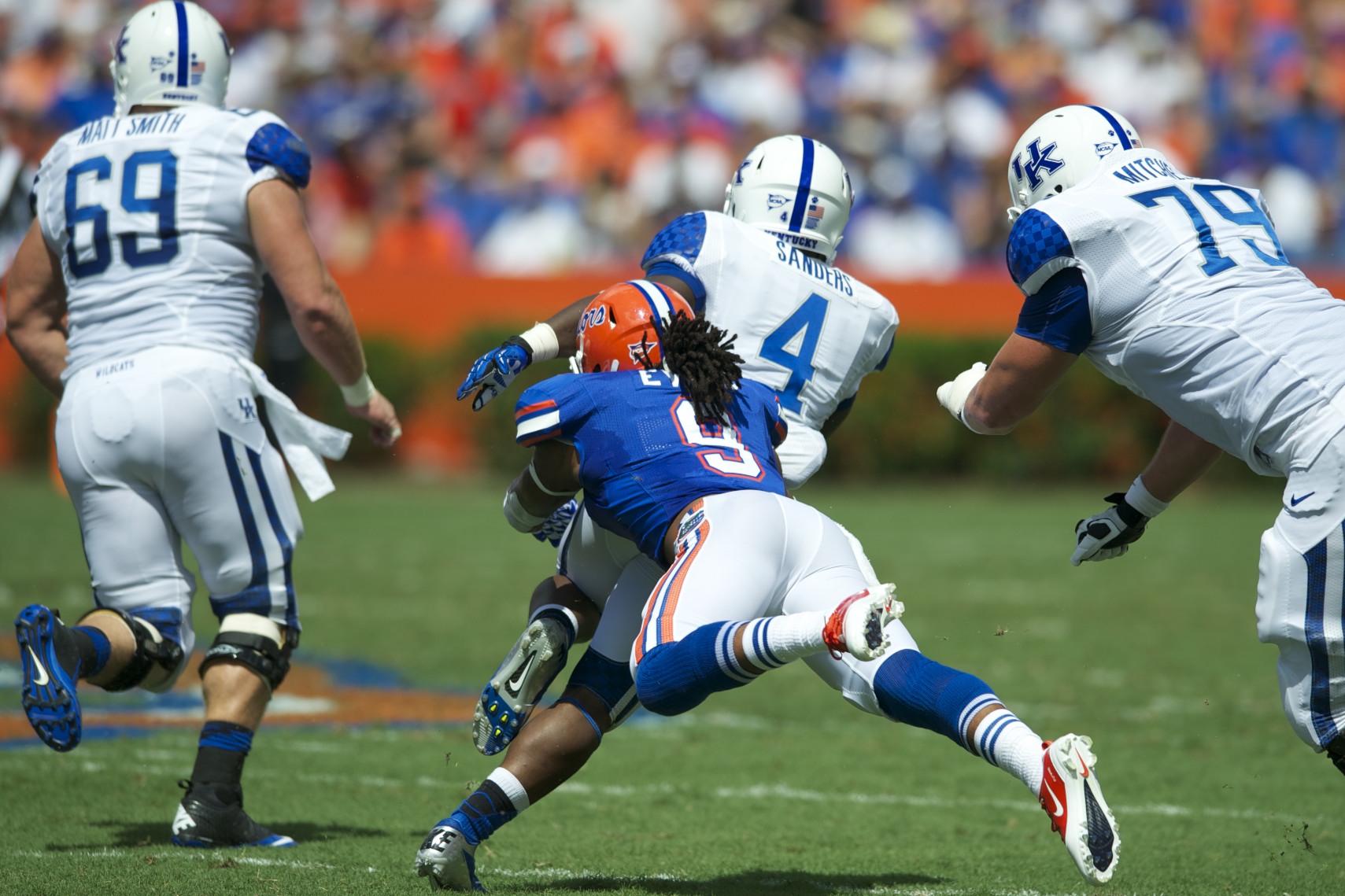 Defensive back Josh Evans single-handedly takes down Raymond Sanders of the Kentucky Wildcats.

Former Florida Gators safety Josh Evans recently retired as a member of the Jacksonville Jaguars.  Evans played for the Gators from 2009 to 2012 before eventually being selected in the sixth round of the 2013 NFL Draft by the Jaguars.  Evans played with the Jags for three seasons from 2013 to 2015 but was ultimately being released in September of 2016.  He was then signed by the Redskins in October of the same year but was released just three weeks later. In 2019, Evans signed with the Orlando Apollos of the Alliance of America Football (AAF), but the league shut down shortly after.

Played from 2013-2015 with Jax, finished career with Washington

Time As a Gator

While a member of the Gators, Evans played under both Urban Myer and Will Muschamp.  He started in 27 of the 47 games he appeared in and recorded an impressive 154 tackles.  During his senior season, Evans really stood out leading the team in tackles during four different games.  In his final career game, the 2013 Sugar Bowl, Evans recorded an interception in a loss to Louisville.

Evans talked about the transition from high school to college and his time at the University of Florida in an interview on Sport Scene hosted by Steve Russell.

Evans was widely successful as a member of the Jaguars.  As a rookie, he started in 11 games and recorded 54 tackles.  Evans then continued to ascend in his 2nd year and started 14 games and appearing in all 16.  He was also third on the team in tackles and tied for the lead in forced fumbles.

In 2016, Evans and the Jaguars decided to go their separate ways.  He then signed with the Redskins but his stay was only for a few brief weeks.  Evans was quickly released and it ended up being his last NFL experience.

Evans decided to retire as a member of the Jaguars.  Although the two parted ways, he loved his time in Jacksonville and felt it was only appropriate to return for his retirement.

When Steve Russell asked him about his choice to retire and the challenges of the decision, Evans talked about listening to your mind and body.

William Silverman is a junior at the University of Florida from Philadelphia who is interested in pursuing a career in business, communications and journalism.
Previous Top Five Former Gators Players in the MLB
Next Lee Corso Talks About Upcoming College Football Season