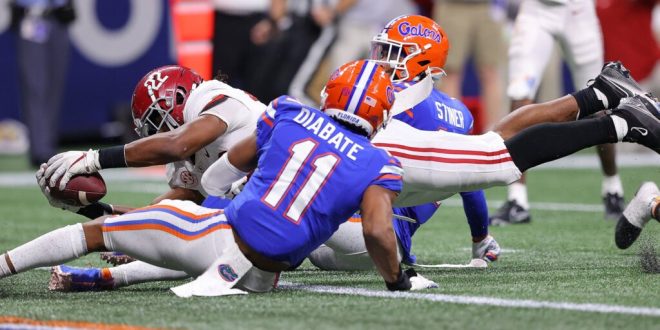 Mohamoud Diababte tackle during the Cotton Bowl. (Photo Courtesy of The Athletic)

There is no doubt that the Florida Gator defense struggled last year but that group is looking to change things around this season.  Junior linebacker Mohamoud Diabate spoke about the hard work and preparation the defense has made in the off-season to ensure the defense is back this year.

“We didn’t know what was coming for us last year, last year was a year of uncertainty,” Diabate said, “When things are uncertain, it is hard to prepare.”

#Gators LB Diabate believes the clarity provided this season compared to last has the team in a position to compete at a high level and accomplish their goals.

“Since January we’ve been busting our tails,” Diabate said, “At this point, it’s just time to go.”

Diabate raved about the depth of the Gator defense this season and expects for that group to rebound from last season. He said that there is no drop-off when it comes to switching first and second team players.

When it comes to himself, Diabate explained that his versatility on defense will be put to use this season. He could play a number of positions such as defensive end, inside and outside linebacker, or even defensive back.

“It depends on the package,” Diabate explained, “I could be anywhere.”

With both the defensive depth and his own versatility, Diabate believes the Gators have put in enough work to be ready for this coming weekend’s game against FAU.

The Florida Gators will host the FAU Owls Saturday night. Tune in to the live coverage of this game starting at 3:30 p.m. on ESPN 98.1 FM 850 WRUF.