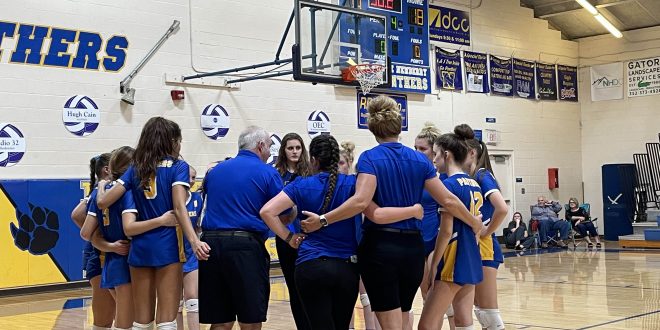 The Newberry High School gymnasium echoed as fans stomped their feet in support of the Lady Panthers despite a tough loss to the Oak Hall Eagles on Monday night.

Teams Put Up a Good Fight

The Lady Panthers started out strong with a 25-23 win in the first set against the Eagles.

Abby Pace started the second set with an ace to bring the Lady Panthers up 3-2.

The second set remained close throughout its entirety. Both teams scored point after point until Oak Hall took the lead.

The Eagles took the second set tying the teams 1-1.

Newberry Head Coach Hank Rone was unhappy with many of the referees’ calls and was getting frustrated.

“Maybe you should tell him what we’re seeing,” Rone said to the assistant referee after throwing his notebook on the court.

The Eagles took a strong lead in set three. They were up 15-8 quickly, but the Lady Panthers stayed positive.

Newberry calls a timeout due to many team mistakes.

“All for the Panthers,”

“Stand Up and Holler!”

Newberry fans knew how to keep spirits up in a frustrating match.

The errors continued and the lady panthers were now down 20-12 against the Eagles after a net violation.

Tensions were high as the fourth set began. The teams were neck and neck from the beginning, this set would decide if the Eagles took the win.

Both teams were determined, keeping the score difference small as the largest lead was only two points throughout the entire set.

Getting down to the wire, it is 20-18 Eagles. Newberry continues to fight back and takes the lead to make it 24-23 Lady Panthers.

The crowd erupts on the last play as Newberry thinks the ball lands inside the sideline.

The referee, on the other hand, thought otherwise. The referee calls the ball outside the sideline which results in a point for Oak Hall.

Newberry coaches and fans erupt with madness as the assistant referee on Newberry’s side saw the ball landed inside the line.

In this video, the confusion is clear in Chloe Jones’ (15) face as she enters the game upon the call.

After talking to the captains, he still calls the ball outside.

Coach Rone tells the assistant referee to go tell him what she saw with her own eyes.

“Are you gonna go tell him what you saw?” Coach Rone said to the assistant referee in front of the crowd.

She still can not sway the other referees’ call as he continues to call the ball outside. It is now tied at 24-24.

“I want him x’ed off here,” Coach Rone said to the Newberry Staff.

The referee throws a yellow card on the Panthers’ coach.

The Lady Panthers did not crack under pressure and stayed determined throughout the remainder of the game. The score hit 26-26.

The Eagles sealed their win 28-26, causing an uproar in the gymnasium. Parents, fans and coaches were not pleased.

The Eagles coach approached the Lady Panthers from the other side of the net wishing them luck in the playoffs.

“No one’s ever cared for you, go home,”  said an angry Newberry mother to the Eagles coach approaching the girls.

The Lady Panthers were a testament to team spirit despite the hard loss.

Many players stood out with impressive plays throughout the game.

Kirsten Thomas (1) knew how to pancake the ball to save many plays. Thomas served as the team’s starting libero and played the majority of the game.

Mykenzie Tiller (12) also had an impressive game. Tiller displayed humbleness as she scored high and resembled a leader for the Lady Panthers.

Faith Wilson (9) was a powerhouse. Wilson had four kills in the second set alone and never lost the smile on her face.

Abby Pace (11) hardly had a break throughout the game. Pace had the majority of the team’s assists, helping to keep the scores tight until the end.

All seniors, the Lady Panthers have great team leadership in Thomas, Tiller, Pace and Wilson.

The Lady Panthers are 2019 and 2020 FHSAA District Champions, Regional Champions and State Runner-Ups. They hope to get back to state and win this season.

Newberry High School knows how to get rowdy on a Monday night! The Lady Panthers played hard and remained positive throughout a tough competition with the Oak Hall Eagles.