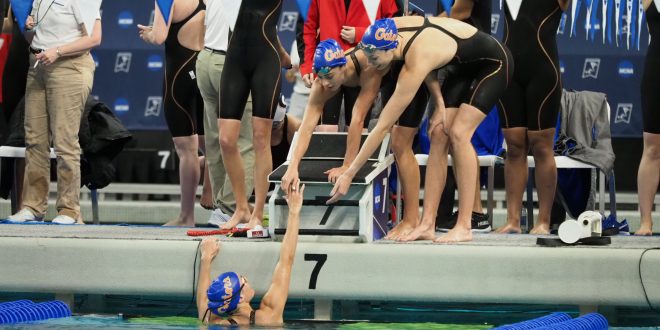 Seven-time Olympic gold medalist Katie Ledecky announced earlier today that she is joining the Gator Nation as a swimming and diving volunteer coach.

In addition to helping the team, Ledecky will also train for the 2024 Paris Olympics. She trains with Florida’s head coach Anthony Nesty. Nesty was an assistant coach for team USA in the Tokyo Olympics.

The 24-year-old Bethesda, MD native trained at Stanford University under coach Greg Meehan since she was a freshman in 2016.  In her two years of collegiate swimming, Ledecky was able to lead Stanford to back-to-back Pac-12 and NCAA team titles in 2017 and 2018. She also broke 15 NCAA records and 6 NCAA Championship records along the way.

In 2017, she became the second freshman ever to be awarded the Honda Cup. In 2018, she became the first-ever sophomore to be named CoSida Academic All-American Team Member of the Year across all Division I sports.

She is a 10-time Olympic medalist and a 15-time World Champion Gold Medalist.  Throughout her career, Ledecky broke 14 world records and 37 American records. She is the first Team USA female swimmer to win an individual event, the 800 meter freestyle, in three consecutive Olympics. Ledecky also won the first-ever women’s 1500 meter freestyle event at the Tokyo Olympics. Additionally, Ledecky is a three-time USOPC Sports Woman of the year.

Ledecky looks forward to her move to Gainesville to be closer to her family.  She is excited to work for the Gators’ “world-class swimming and diving program” and train with Nesty.

Nesty thinks the skills and knowledge Ledecky brings to the team is “unparalleled.” He says she will make a great impact on the student athletes at Florida.

Jolie Katzen is a third-year Journalism major with a focus on sports media at the University of Florida.
Previous Gators Jeremiah Moon takes leadership role
Next Gators Soccer To Face Kentucky 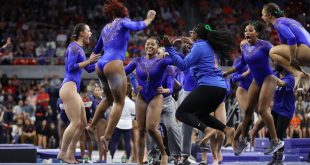 This meet had it all. Drama, perfection and history were all on display as the …