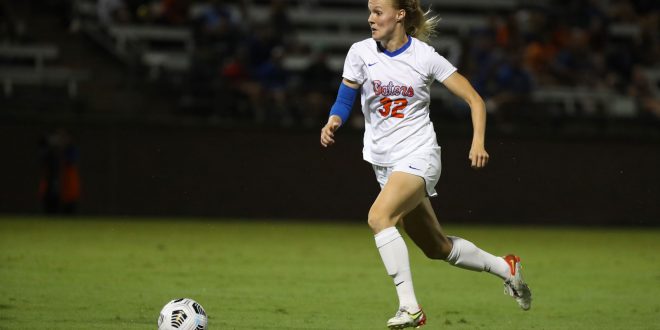 Both teams are looking to get their first conference win of the season. Florida owns the all-time series record at 24-5-3 and won the last matchup between the two.

Thursday’s game will be a rematch of the 2020 SEC Tournament. Florida defeated Kentucky in a 6-5 overtime thriller to advance to the second round of the tournament. Florida’s Parker Roberts opened up scoring in the 24th minute, but the Wildcats were quick to respond and took a 3-1 lead going into the half. The Gators came back with a strong second half but ended regulation tied at 5. Cassidy Lindley scored the golden goal for the Gators in the 95th minute.

Possibly the most memorable part of the match was the Florida sideline. The Gators’ bench was loud and rowdy, helping them keep the momentum and secure the win.  Players were seen jumping, dancing, running down the sideline, and even practicing their CPR skills out of pure excitement.

The Gators have tied both of their last matchups 0-0 in double overtime. Against North Florida, the Gator offense took eight shots and found the back of the net once, but it was called back for offside. Sophomore goalkeeper Alexa Goldberg recorded four saves for her third clean sheet of the season against North Florida on Sunday. Goldberg now leads the Southeastern Conference with 46 saves and a .742 save percentage.

“We didn’t concede any goals on the weekend and think if we can build on that, execute going forward, we should be able to score some goals and win some SEC games.” – Florida Head Coach Tony Amato

The Wildcats enter Thursday night after posting a shutout victory against Bellarmine on Sunday. Kentucky dropped its first SEC match of the season against Texas A&M, losing 3-0 to the Aggies. Leaders on the Wildcat offense include Jordyn Rhodes and Hannah Richardson, who have score eight goals apiece. Rhodes’ also leads the conference with 21 points on the year.

The Gators will be honoring 50 years of women’s athletics at the University of Florida in a season-long celebration. In its 27 seasons, UF soccer advanced to the NCAA Tournament 22 times and won the national championship in 1998. Florida also leads the league with 14 Southeastern Conference titles. The Gators will be wearing 50th Anniversary warm-up shirts prior to Thursday’s game.

It's the 50th anniversary of women's athletics at Florida – and we're ready to celebrate! #GoGators #MyGators50