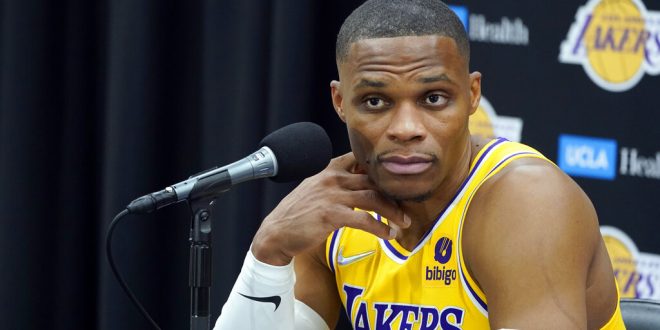 At his first media day as a Laker, Russell Westbrook reflected on what it means to be in Los Angeles.

The 2017 league MVP landed in L.A. this summer after a stunning trade from Washington in exchange for Kyle Kuzma, Kentavious Caldwell-Pope, Montrezl Harrell, and the 22nd overall pick of the 2021 Draft. Westbrook was all smiles while draped in the Lakers’ iconic purple and gold uniform as he discussed his process to get better, his new teammates and being back home.

One of the biggest things that surrounded the news of Westbrooks trade was that the point guard would finally be home. Westbrook was born in Long Beach, California, and attended UCLA from 2006-2008. The L.A. native went to Leuzinger High School, just 30 minutes away from the Staples Center. Westbrook said it is a dream come true for him to represent his hometown once again.

Prior to the blockbuster trade in July, speculations constantly swirled around the NBA about Westbrook making a move to California. The rumors date back to Westbrook’s days in Oklahoma City as fans wondered whether the two-time scoring champion would flee to L.A. following Kevin Durant’s departure from the Thunder. Westbrook explained that there has been many conversations about him returning home but he never imagined the moment would come to fruition.

With being on a new team comes new teammates and new roles. Westbrook said that he embraces how he fits on his new roster and is here to make his new teammates better. Although, some of his new teammates aren’t so new to him. The 13-year veteran joins fellow Western Conference All-Star Anthony Davis, former teammate Carmelo Anthony and longtime friend LeBron James.

Following the news of Westbrook to the Lakers, many analysts and fans have voiced their theories on how well the team will be able to play together. Many express that the star-studded roster will struggle to space the floor and fit together. Westbrook told reporters that he doesn’t pay the notions any mind and that his job is to make his teammates better.

Westbrook is very privy to playing alongside some of the leagues best players. With joining the 2020 NBA Champions, Westbrook recognizes that he has a job to fulfill and urged while doing so he will continue to make his teammates better and comfortable.

The desire to make his new teammates comfortable was also echoed by LeBron James. The 4x NBA champion said in his own separate press conference that the teams job is for Westbrook to feel comfortable in their system. Westbrook offered many kind words and respects to LeBron during his press conference. He said that now as his teammate, he is able to see James’ preparation and a new side of him.

Having seen him as the opponent in the 2012 NBA Finals, and only playing alongside each other during All-Star and Olympic games Westbrook said that he is able to learn from James.

The Lakers opens the NBA’s preseason Sunday at home when they host the Brooklyn Nets.