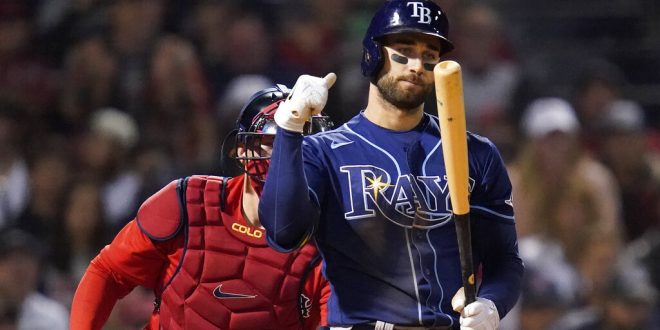 The Tampa Bay Rays season is over.

Thank you for your passion, energy, and encouragement all season long. We couldn't have made it this far without all of you pic.twitter.com/hCM1nBkLzj

After a 100 win season, the Rays were in the midst of a special accomplishment in 2021. Notably, Tampa has seen two championships this calendar year with the Lightning and the Buccaneers. Ideally, the Rays were to continue that trend, winning their second straight AL East title with a league leading 100 wins. But, such aspirations are held idle after the Red Sox closed out a 3-1 ALDS victory Monday.

While the Rays fell short of the commissioner’s trophy, it’s unfair to dismiss the magnificent play in 2021. In 2020, Tampa won the AL pennant, falling to the Dodgers in the World Series after a strong run. But, after losing former Cy Young winner Blake Snell and All-Star Charlie Morton, critics questioned if the Rays could repeat 2020’s magic.

Yet, in the first full 162 game season since 2019, the Rays did not miss a beat. Likewise, Tampa held an AL leading 100 wins in 2021, winning their second straight AL East title, with the Red Sox trailing by eight games. Also, they saw three players go to the midsummer classic: Joey Wendle, Mike Zunino and Andrew Kittredge. Red Sox manager Alex Cora knew how good this Rays team is.

So, with 2021’s repeat success, it’s plausible to expect a championship run from the Rays. However, anything can happen in October.

After defeating the Yankees in the AL Wild Card game, the Red Sox advanced to face the Rays in the ALDS.

Game one saw the Rays fans were expecting. Behind a heroic performance from 2020 postseason hero Randy Arozarena, the Rays won 5-0 and took a 1-0 series lead. Yet, from there, the Sox never look back.

Boston dominated the series with their bats, winning 14-6 Friday for Game 2 and 6-4 Sunday for Game 3. Yet, it was Game 3 which saw a walk off home run from Christian Vazquez, giving the Sox a 2-1 lead. After Sunday’s dramatics, critics wondered if they could close the series Monday.

The Red Sox did just that, clinching ALCS berth with a 6-5 victory behind a walk-off sacrifice-fly from Kike Hernandez. Evidently, this win eliminated the Rays from the 2021 postseason, putting to rest any aspirations of a World Series run.

KIKÉ HERNANDEZ SENDS THE RED SOX TO THE ALCS

For Boston, they’ll advance to the ALCS, awaiting the winner of the Astros-White Sox series. Justly, Cora is happy with what he’s seen from his team.

For the Rays, a strong season gets an upsetting end. This offseason, Tampa will have 10 players with a club option, with Nelson Cruz and Mike Zunino headlining the group. Assuming they can take care of their own, the Rays should field another competitive roster in 2022. Next time, maybe they’ll add to the legacy of  ‘Champa’  Bay.

Sam Petosa is a Journalism major pursuing a Specialization in Sports and Media at UF. The South Florida native produces daily shows for WRUF, including "Sport Scene with Steve Russell, and "The Tailgate." In addition, Sam provides weekly sports updates for WUFT News and radio Sportscenter's for WRUF radio. Sam has been a writer at ESPN Gainesville since January 2020.
@sampetosa5
Previous Ravens Make Comeback To Defeat Colts In OT
Next Braves One Win From NLCS Birth