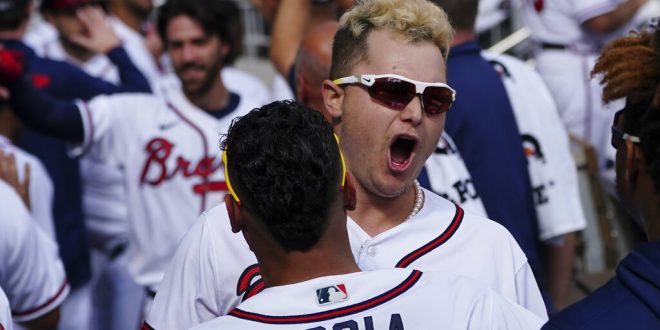 Atlanta Braves' Joc Pederson (22) celebrates his three-run homer in the dugout against the Milwaukee Brewers during the fifth inning of Game 3 of a baseball National League Division Series, Monday, Oct. 11, 2021, in Atlanta. (AP Photo/John Bazemore)

The second blow occurred on July 10.  Atlanta’s Superstar outfielder Ronald Acuña Jr. was sprinting back while tracking a line drive off the bat of Miami’s Jazz Chisholm when he leaped and landed awkwardly tearing his right ACL.

For the majority of the season, nearly nothing went right for the Atlanta Braves.  They headed into the All-Star break standing at 44-45 and four games back of the New York Mets in the NL East.  Now, just three months later, they are one win away from returning back to the NLCS.

Not only has his composure been unfathomable, but his stuff has been devastating.  Complimenting his fastball that occasionally touches 95 mph, Anderson throws a changeup that disappears out of thin air.  Relying on that pitch, Anderson was able to toss five scoreless innings while striking out six.

The Atlanta offense was held relatively quite, but a 5th inning three-run homerun via Joc Pederson was enough to get the job done.

Who will toe the mound for the Brewers heading into Game 4?  It won’t be Game 2 pitcher Brandon Woodruff.  It certainly won’t be Game 3 pitcher Freddy Peralta, who by the way was excellent himself tossing four scoreless and striking out five.  Could it be Game 1 pitcher and potential NL Cy-Young Corbin Burns? No, according to manager Craig Counsell.

To this point in the series, the Brewers success has come and gone with their pitching.  Their bats have yet to wake up, scoring zero runs the past two games.  Even so, they are hopeful to break out soon.

The Braves are yet to announcer their pitcher for Game 4.  Ultimately, if the Brewers can’t get the bats going rather quickly, they will have all offseason to try and wake them up in preparation for the 2022 season.

William Silverman is a junior at the University of Florida from Philadelphia who is interested in pursuing a career in business, communications and journalism.
Previous ‘Champa’ Bay No More: Rays Eliminated by Red Sox in ALDS
Next Jon Gruden Resigns as Las Vegas Raiders Head Coach