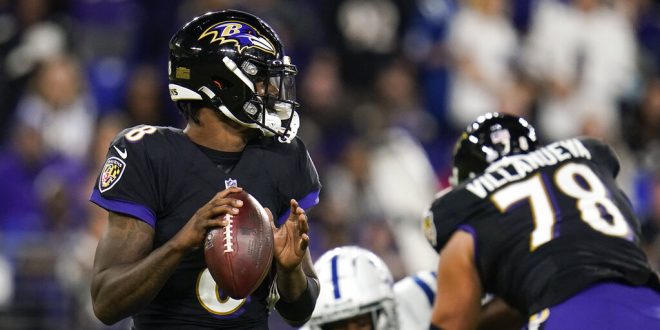 Baltimore Ravens quarterback Lamar Jackson (8) looks to pass during the first half of an NFL football game against the Indianapolis Colts, Monday, Oct. 11, 2021, in Baltimore. (AP Photo/Julio Cortez)

Week 5 of Monday Night Football did not disappoint as the Ravens made an unpredictable comeback in the 4th quarter to take the Colts into overtime.  The Ravens managed to score 22 straight points to escape the Colts with a final score of 31-25.

Back in action Sunday at 1 p.m. on CBS! pic.twitter.com/42SyPE7qKG

The comeback credit goes toward Ravens QB Lamar Jackson who directed his team to victory. Jackson was able to overcome the largest point deficient he has seen by passing a career-high of 442 passing yards overall and four touchdowns in the second half. The QBs stats broke records by becoming the first in the NFL to complete 85% of passes in a 400-yard game. After the win, Ravens fans and Jackson’s teammates were heard chanting, “MVP! MVP!.”

“I feel like, our team, the guys we have, there’s always a chance. Lamar is the one that makes it go,” said DE Calais Campbell, “When he’s on the field we know we can score points in a hurry and in a lot of different ways.”

Head Coach Harbaugh explained that the comeback was not so easily made. Through adjustments, resilience, and an incredible performance by Jackson, the Ravens enter week 6 at 4-1.

Despite the loss, Colts QB Carson Wentz also put up great numbers for his team. Wentz put career-high stats on the board with 402 passing yards with 71.4% accuracy, no interceptions, and two touchdowns. Then, RB Jonathan Taylor totaled 169 yards on 18 touches and adding two touchdowns. The Colts move to 1-4 on the season and are third in the AFC south. This weekend, Indianapolis will host Houston.

Parker Welch is a Senior at the University of Florida majoring in Sports Media at the College of Journalism & Communications.
@parkerrwelch
Previous Dan Mullen Talks Trip to Baton Rouge
Next ‘Champa’ Bay No More: Rays Eliminated by Red Sox in ALDS