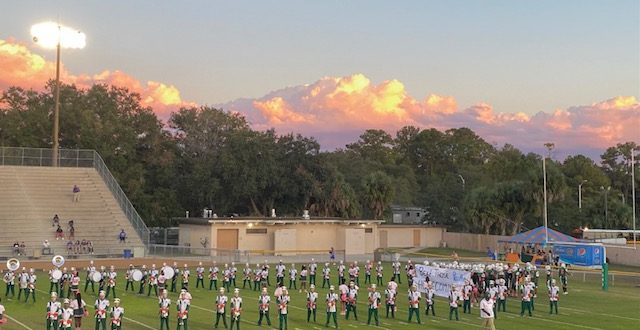 It was a slow start for both the Rams and the Panthers. The Panthers took the opening kickoff 60 yards with promising field position to start the game. The Rams defense was able to hold strong and force a punt even after the superb field position. This was the theme for the rest of the first quarter as each team played the field position game.

After a quarter full of defensive stops and a missed field goal by Newberry, the end result was a score of 0-0 after 1 quarter of play.

Newberry’s offense was clicking on all cylinders on the first drive of the second quarter. The Panthers were able to break the scoring barrier with a 9-yard scamper by Keenon Johnson. After a missed extra point left the score 6-0 Panthers. The Rams were quick to answer with a touchdown reception by Andre Radford to put them ahead 7-6.

Trickery and scheme helped Newberry sneak in a late touchdown to close out the first half. A perfectly executed fake punt led the Panthers to be able to punch it in right before the half to retake the lead 14-7.

Tug of War Continues in Second Half

The Newberry offense continued to find its rhythm in the second half. Following a nice drive by their defense, senior Perrion Sylvester added on to his monster night with another touchdown pass to extend the Panthers lead 21-7 midway through the third.

Eastside showed resilience throughout the whole game, given the tug of war description of the game. They were able to respond to the Panther’s touchdown with a passing approach on their next drive. Eastside was able to finish off the drive with a two-yard run by Darlan Smith.

Darian Smith scored a TD for @EHSRamsFootball to make the score 14-21 with 35 seconds left in the third. pic.twitter.com/38TTx3yUjG

The Rams defense showed up all night and gave their team a chance to win down the stretch. When they needed to show up most, down one score with 7 minutes remaining in the fourth, the Rams defense was able to create a turnover. The interception gave the Rams and the fans some momentum, it did not last long as the following offensive possession ended in a 3 and out.

It would not be the last chance for the Rams. After the defense once again showed up and forced a punt, the Rams offense had one final opportunity to drive the distance of the field. On the first play of the drive, Newberry was able to put the dagger in Eastside with a pick-six, extending their lead to two scores with less than a minute.

Insight from the Coach

Coach Deleon had a lot to say after tonight’s game when asked about his assessment of the game, “I feel like the kids displayed some maturity, displayed some composure. Some adversity hit our weight but I think they handled it well. Obviously, the score isn’t vindictive of how we played.”

Coach Deleon and his Rams hope to get on track next Friday 10/22 at home against Palatka.