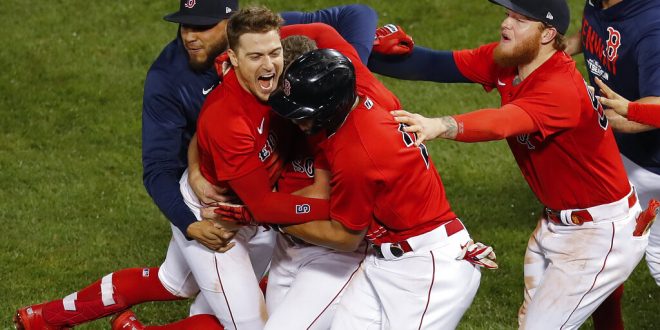 The Boston Red Sox will be heading to Houston to take on the Astros in Game 1 of the ALCS. Both teams are coming off 3-1 series victories in the ALDS round.

Boston’s path hasn’t been an easy one as they started their playoff run against the New York Yankees in the AL wild-card game. They took the early lead scoring two runs in the first inning and never looked back. They won the game 6-2 and moved on to the ALDS round.

Here, they took on the top-seeded Tampa Bay Rays. They started the trip in Tampa dropping the first game. However, this didn’t make them nervous. They stole game two from the Rays and won both of their games in Fenway.

Now they are moving on to Houston which won’t be any easier. Red Sox manager Alex Cora respects Dusty Baker, the Houston Astros manager, and knows he will give him a run for his money.

Boston’s key players showed up to play against the Rays. In their Game-four win, Rafael Devers had a monster game. Devers went 3-for-4 on the night including a home run in the third inning.

While he knows he has a great team, Cora is well aware of the talent the Astros have.

Houston’s time in the playoffs, while less extensive, hasn’t been easy either. The Astros won the AL West and went straight to the ALDS where they saw the Chicago White Sox.

The Astros didn’t need a fifth game as they got the 3-1 series win against the White Sox. The team has a lot of momentum following their 10-1 victory in Game four of the ALDS.

Cora knows he will have to make some tough decisions and bring aggressive pitching against the Astro’s talented lineup.

Tonight’s starting pitchers will be Chris Sale for the Red Sox and Framber Valdez for the Astros. In his last game, Sale struggled and was pulled after one inning in which he gave up five runs. Valdez’s last action was in Game 2 against Chicago where he gave up four runs in four innings.

The Red Sox have a challenge ahead of them in Houston and its jam-packed stadium. Houston’s last two home games had more than 40,000 in attendance. The Astros’ extra home game could give Boston some trouble as Houston had a 51-30 home record through the regular season.