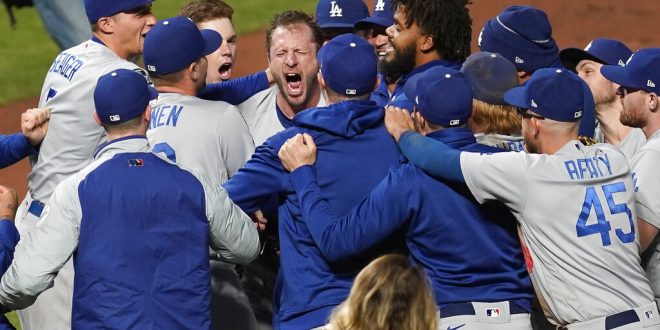 In what may have been the most anticipated division series in recent memory, the Los Angeles Dodgers triumphed in San Francisco in the winner-take-all NLDS Game 5. The Dodgers now advance to the National League Championship series to face the Atlanta Braves, while the Giants’ season has come to a heartbreaking end.

After trailing 2-1 in the series, the Dodgers won a critical game four in Los Angeles by a 7-2 score to even the series and force game five. Both teams had totaled 109 wins on the season leading into game five. This made last night’s game the winningest matchup in a winner-take-all game in MLB history.

The Dodgers originally announced Julio Urias to be their game five starter, only to replace him with Corey Knebel hours before the game started. Many suspected the Dodgers were trying to show a “fake starter,” like the Brewers did against the Dodgers in the 2018 NLCS. As for the Giants, they went with their ace. Logan Webb started for the second time of the series. This time he pitched with the entire season on the line.

The game was pitching dominant, just as advertised. Knebel only threw one inning for the Dodgers before being replaced by Brusdar Graterol. An inning later, Graterol was then relieved by Julio Urias. Meanwhile, Logan Webb was cruising for the Giants. In Webb’s first two innings, he faced the minimum six batters, and his only hit was erased by a double play.

Urias came in and pitched three straight shutout innings out of the pen. The only issue for the Dodgers was Logan Webb was matching their pitching and after five innings the game remained scoreless.

Through the first five innings, the two teams combined for six hits and no runs. The two teams also combined for 11 strikeouts. The pitchers were rolling and the game remained deadlocked. Scoring had to open at some point though.

In the top of the sixth, Mookie Betts singled for his third hit of the game. Betts then stole second base with Corey Seager batting. Seager then hit a double on a flare right over the head of third baseman Evan Longoria, which allowed Betts to score to break open the scoring.

However, the Dodgers’ lead did not last long. Leading off the bottom of the sixth, Darin Ruf battled with Julio Urias to a full count and then hit a solo home run to center field. At 452 feet, Ruf’s home run stands as the longest so far this postseason.

Are You Afraid of the Bark? pic.twitter.com/zV2uC1L7vb

Logan Webb pitched the seventh inning to finish with four hits and one run allowed, and racking up seven strikeouts. Urias was replaced by Blake Treinen in the bottom of the 7th and the game would see no more scoring through the seventh and eighth innings.

Camilo Doval was on the mound for the Giants entering the top of the ninth. After forcing a groundout by catcher Will Smith, Doval hit Justin Turner with a pitch to put the go-ahead run on base. Gavin Lux then singled to right field followed by a Cody Bellinger single up the middle to drive in Turner and give the Dodgers a 2-1 lead. Doval was relieved for Kevin Gausman who got the Giants out of the inning.

After using Kenley Jansen in the eighth, the Dodgers brought in Max Scherzer to close the game in the ninth. With one out, Kris Bryant reached first on a fielding error by Justin Turner. It looked as if the Giants would have a lifeline in the ninth. LaMonte Wade Jr. was called on to pinch-hit, but was struck out looking. Down to their last out, the Giants’ hopes lied on the bat of Wilmer Flores. After battling to a two-strike count, Scherzer threw a ball in the dirt that Flores offered a check-swing. The swing was controversially ruled a swing by first base umpire Gabe Morales and ended the game, the series, and the season for the Giants.

Reaction to the Call

Immediately after the call was made, it was met by thunderous boos around the stadium, as you would expect. Even the TV commentators described the check-swing as “not even close.” Twitter blew up with fans and even some players expressing their distaste.

This ain’t even close. Wilmer Flores didn’t go. Suspend that first-base umpire or something.

Wilmer Flores and the Giants just got screwed pic.twitter.com/UgVIxr6dUt

Giants’ manager Gabe Kapler said himself and the team are not dwelling too hard on the call. He says they are “way past the frustration” they felt in that moment. According to Kapler, they do not see any reason to for them to pick apart the call. Kapler also said the team is proud of what they accomplished this season. Now they look to build on their success into next year.

The Dodgers win the first ever postseason meeting between them and their hated rival. Their season now continues as they travel to Atlanta to start an NLCS rematch with the Braves. The Dodgers have won 110 games this season and are now just eight wins away from becoming the first team to repeat as World Series champions since the 2000 New York Yankees.

For the Giants,  their season has now met a sad and heartbreaking end. This series should not take away from what the team accomplished this season though. Originally, they were projected to finish below .500 and considered to be a team of washed-up stars. Instead, they battled for six months and won 107 games in the regular season, snatched the NL West crown from their rival Dodgers, and nearly made it to the NLCS. Gabe Kapler is also now a strong favorite to take manager of the year. Now comes the offseason. With 18 players hitting free agency, including franchise catcher Buster Posey, the challenges now fall on the front office to bring the team back for next season.

Jack Shivertaker is a senior at the University of Florida pursuing a degree in Journalism with a focus on sports media.
@JackShivertaker
Previous Eastside Loses in Tug of War Game Against Newberry
Next CFB: Ole Miss at Tennessee Preview