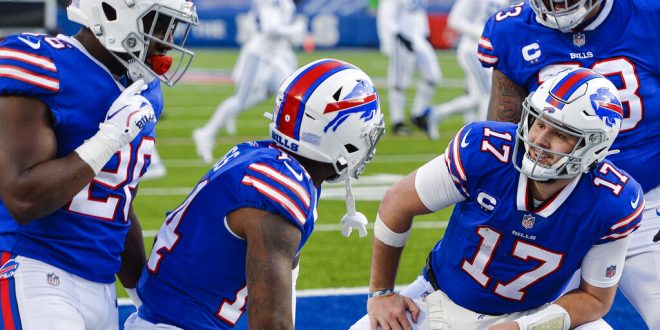 Buffalo Bills' Josh Allen (17) celebrates with teammate Stefon Diggs (14), Dion Dawkins (73), and Zack Moss (20) after connecting with Diggs for a touchdown during the second half of an NFL wild-card playoff football game against the Indianapolis Colts Saturday, Jan. 9, 2021, in Orchard Park, N.Y. (AP Photo/Adrian Kraus)

The Buffalo Bills take a trip down to Tennesee for a Monday night face-off with the Titans.

After an 11-5 record in the 2020-2021 regular season, the Titans looked to make noise in the playoffs. The Titans went on to lose 20-13 to the Baltimore Ravens in the AFC Wild Card round.

The early exit prompted the Titans to make major moves this offseason. The most notable of those being the acquisition of wide receiver Julio Jones. Bringing together a trio of Jones, AJ Brown and Derrick Henry.

The expectations for the Titans’ offense coming into the 2021 season were high.

However, Tennessee has gotten off to a slow 3-2 start. Many of the struggles can be attributed to Jones, Brown and Henry only playing two whole games together.

Brown and Jones have both been battling hamstring injuries that have kept them off the field for multiple games.

Jones is expected to return Monday night against the Bills, but Brown is listed as questionable with an illness.

While Brown and Jones have been in-and-out of the lineup, running back Derrick Henry has remained dominant.

Through five games, the All-Pro running back has already gained 640 yards on the ground, adding seven touchdowns.

However, in Henry’s three meetings with the Bills, he has failed to gain over 100 yards rushing.

Bills Having a Ball

After a Week One loss to the Steelers, the Josh Allen-led Bills have won four straight. And the Bills quarterback is putting up MVP-caliber numbers.

Through five games, Allen has thrown for 12 touchdowns on just two interceptions. He has also added two more touchdowns and nearly 200 yards on the ground.

The Bills offense has been hitting on all cylinders this year. The Bills have scored over 35 points in each of their last four games.

But it is the defense that will face the biggest challenge. That challenge being the 6-foot-3, 240-pound force that is “King” Henry.

“He’s good outside, he’s good inside the tackles,” McDermott said, “He’s fast and he pulls away from DB’s when he has the ball in his hands.”

The Bills’ defense has performed well against the run this year. Through the first five games, the Bills have only given up 329 yards and one touchdown on the year.

Since taking the Bills quarterback job, Josh Allen is 2-1 against the Titans. When these two teams crossed paths in 2020 the Titans dominated 42-16.

The Bills will look to avenge that loss when the game kicks off at 8:15 p.m.

Chris Will is a second-year journalism student with a focus in sports and media. Originally from the Fort Lauderdale area, Will is now the beat reporter for Florida Gymnastics and covers all things sports in Gainesville.
@_Chris_Will_
Previous Chicago Sky Wins First WNBA Championship
Next Possible Ed Orgeron Replacements