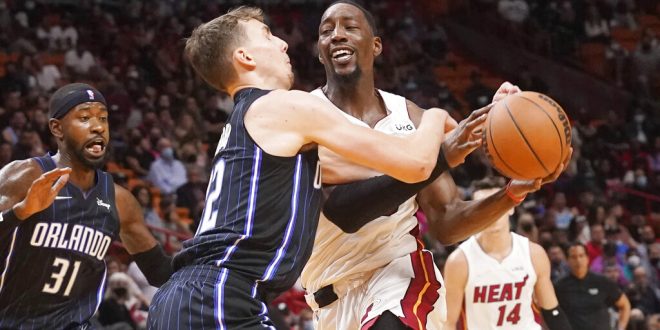 Entering last night’s matchup the Orlando Magic and the Miami Heat sat at 1-1. Orlando recently defeated the Knicks to claim their first win of the season. On the other hand, the Miami Heat suffered their first loss in a heartbreaking defeat in overtime to the Pacers.

Last night’s matchup ended in victory for the Miami Heat as they started out hot ending the first quarter up 27-15. That proved to be the difference-maker as the Miami Heat beat the Magic 107 to 90. Jimmy Butler ended the day with 36 points (24 in the first half) and 5 steals. Butler shot 15 for 21 on 71 percent shooting. Bam Adebayo and Markief Morris also added 16 points each for the Miami Heat. No player for Orlando scored more than 15 points. Miami’s strengths rely on their depth and if they are looking to continue to stay dominant in the East, expect a wide variety of leading scorers which is all led by one of the best two-way guards in the league, Jimmy Butler.

The Orlando Magic fought well. They were able to cut the lead down to 6 points twice but the Miami Heat stood their ground. Six starters for the Magic led scored double digits. Jalen Suggs and Franz Wagner led Orlando in scoring with 15 points each.

On the bright side for Orlando, even with 18 turnovers and giving up 21 fast-break points at times, it looked like they were in control. For a team that recently traded their stars, Aaron Gordon and Nikola Vucevic the future looks bright. Rookies Jalen Suggs and Franz Wagner look like they could be a deadly dynamic duo in the future. For the Magic, they must improve their young talent to eventually be formidable foes in the East.

Looking forward to the next matchup the Miami Heat will play Kevin Durant and the Brooklyn Nets at 7:30 on Wednesday Night. The Nets are currently 2-2. The Orlando Magic will face off against the 3-1 Charlotte Hornets Wednesday at 7 pm.

Ethan Sanabria is a second-year telecommunications student on the digital film and television production track at the University of Florida's College of Journalism and Communications. He has previously worked as a broadcaster for the Florida Flight basketball team and currently helps the production of WUFT news facebook lives. You can reach Ethan on any of his social media or at Ethansanabria@ufl.edu.
@ethansanabria
Previous Mullen Speaks Ahead of Matchup with Georgia
Next Lightning lose again as they Look to Cure Cup Hangover Against Penguins