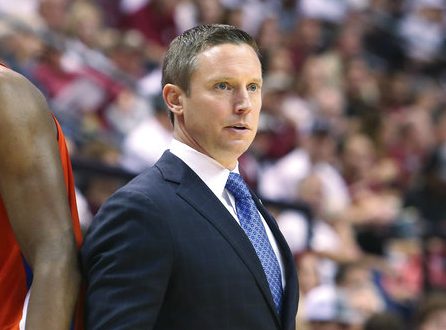 Gators men’s head basketball coach Mike White gets a boost in the 2022 recruiting class as four-star recruit Jalen Reed commits to Florida. This commitment lands another highly sought-after recruit in the 2022 class for the Gators.

White and his staff weren’t the only program interested in the 6-foot-10, 220-lb power forward out of California. However, after one visit in July, the Gators were in the driver seat to land Reed.

“That was actually my shortest visit and I was there for only one day in July but what stood out to me was every single team there is good there so the facilities and the academic piece stood out as well,” said Reed, per 247Sports.

Also in the running for Reeds’ services next fall were Ole Miss, Arizona State, Maryland and Oklahoma. Reed, who has tremendous upside, announced on social media his verbal commitment to Gainesville.

Another Splash Commit for Florida

After the Gators recorded four players via the NCAA transfer portal this past off season, White continues to turn heads in the recruiting trail.

Florida now holds the 13th ranked recruiting class, following the power forwards commitment. Ultimately, as stock continue to rise for Gator recruits, the likelihood of the Florida rising in the rankings is possible.

Aberdeen, currently ranks 193rd in the 2022 class and is expected to bump up as a four-star soon. While Reed is ranked as the No.93 prospect in the latest 2022 composite rankings.

BREAKING: #Rivals150 PF Jalen Reed has committed to @MikeWhiteUF and the #Gators.

Arizona State, Ole Miss, Maryland, Oklahoma and Washington State were additional finalists in Reed's recruitment.@RussHoops breaks down what this means for #UF.

There is no doubt Reed’s size and talent will provide depth to the Gators front court next season especially, looking up to his father growing up. Reed’s father, Justin Reed, is a former SEC Rookie of the year in 2001 for Ole Miss. Later, he played three years in the NBA after being drafted in 2004. Luckily for the Gators, Reed didn’t follow into the steps of his father by becoming a Rebel. Actually, after his single visit on campus, Reed is confident he will immediate impact to help Florida reach new heights.

“I feel like I bring a lot of versatility as well as my size as well,” Reed continued.

“Being my height and being able to do what I can with the ball, I feel like I can really make an immediate impact on the program,” per 247Sports.

"Being my height and being able to do what I can with the ball, I feel like I can really make an immediate impact on the program." || Story: https://t.co/JMuAwepVRV pic.twitter.com/ExhPkAjXOs

Florida now holds the 13th ranked recruiting class, following the power forwards commitment and look ahead to be big players in the transfer portal once again next season.