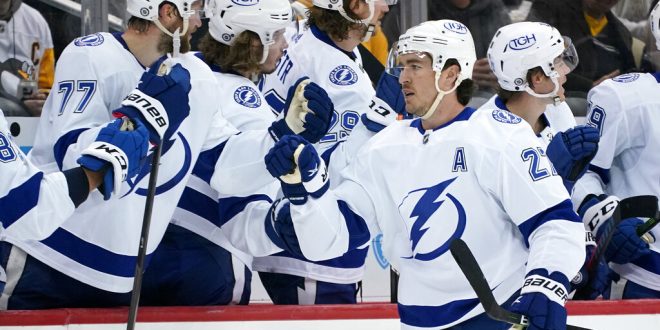 Tampa Bay Lightning's Ryan McDonagh (27) returns to the bench after scoring during the second period of an NHL hockey game against the Pittsburgh Penguins in Pittsburgh, Tuesday, Oct. 26, 2021. (AP Photo/Gene J. Puskar)

The Tampa Bay Lightning throttled the Pittsburgh Penguins in their 5-1 victory on Monday. The Lightning captured their first win in regulation to improve their record to 3-3-1. Meanwhile, the Pens’ (3-1-2) hot start to the season came to an end with their first regulation loss.

When the teams first met on October 12, the Lightning faltered to the Pens in the season opener with a 6-2 loss. Subsequently, the Bolts were able to exact their revenge on Tuesday and successfully snap a three-game losing streak, one loss being in overtime.

The Bolts struck in the second period to earn their first lead in regulation of the season. The last time Tampa Bay led in regulation before their rematch with Pittsburgh was Game 5 of the Stanley Cup final.

The first period saw a wild back and forth with plenty of even exchanges. But after a scoreless first period, Tampa Bay was quick to jump out. Just over 30 seconds into the second period, Brayden Point‘s backhand assisted by Mikhail Sergachev and Alex Killorn opened the floodgates for the Bolt’s scoring.

Ondrej Palat and Ryan McDonagh followed up by beating Pens goaltender Tristan Jarry  and scoring 10 seconds apart with 11:28 remaining in the second period.

Further, Sergachev and Killorn each added scores in the third period to extend the Lightning’s lead.

Killer another empty-netter and the @TBLightning goes up 5-1! #GoBolts pic.twitter.com/kyxHei0Qfz

Now, the back-to-back Stanley Cup champion are feeling back on track after a slow start to the season.

Stars of the night for the Lightning

Tampa Bay’s star goalie Andrei Vasilevsky stopped 28 shots for the Lightning to post a .966 save percentage. He tallies 2.78 goals against per game and a total .904 save percentage so far this season.

The Bolts will look to build on their victory as they return home for two games, starting with the Arizona Coyotes on October 28. On the other hand, the Penguins will welcome the Calgary Flames on Thursday to continue their eight-game homestand. Puck drop for both of these matchups is set for 7 p.m., and the games can be watched on ESPN+.

Tori Edwards is a fourth-year Telecommunications student specializing in News with an outside concentration in Sport Management at the University of Florida. Tori works as an author and reporter for WRUF.com and is the voice of trendings on Wednesday mornings on ESPN 98.1 FM - 850 AM WRUF. You can reach Tori at victoriaedwards@ufl.edu.
@ToriEdwardsNews
Previous Braves Take Game 1 Over Astros In World Series
Next Four-Star Recruit Commits to Florida