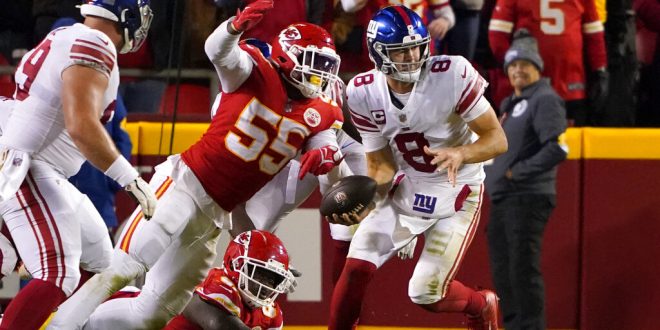 New York Giants quarterback Daniel Jones (8) fumbles as he is sacked for a 6-yard loss by Kansas City Chiefs defensive end Frank Clark (55) during the second half of an NFL football game Monday, Nov. 1, 2021, in Kansas City, Mo. The Chiefs won 20-17.

Monday Night Football this year continues to be the gift that keeps on giving. The struggling New York Football Giants took on the Kansas City Chiefs last night in a game that wasn’t exciting looking on paper. Football, however, isn’t played on paper. Kansas City-New York proved to be must watch TV as the Giants were unable to complete the upset falling 20 to 17.

One of the highlights of the New York Giants in the loss was their defensive game plan. Credit defensive Coordinator Patrick Graham for limiting the Chiefs big play opportunities and making Mahomes play underneath. Another spotlight for the giants was swiss army knife and defensive back Julian Love. Love accredited for picking off Mahomes in the Red Zone during the first quarter showed how he earned his nickname.

Coach Joe Judge calls his DB “Ducktape” for his ability to cover holes on the defensive side.

Offensively, however, the story was completely different. With injuries to Kenny Golladay, Saquon Barkley, Sterling Shepard, and former gators wide receiver Kadarius Toney the offense looked shot. Daniel Jones passed for only 222 yards of offense while Devontae Booker added 60 on the ground. Even with all that being said the Giants could have still won this game.

What a catch from John Ross ‼️

Ten total penalties for the New York Giants including an offside penalty that offset a Darnay Holms interception. That interception called off allowed the Chiefs to march down the field and score the game winning field goal. 20-17 and the rest was history.

For the Kansas City Chiefs they were able to come out with the victory but it didn’t look easy. Throughout the entire year, Patrick Mahomes has had to do the spectacular on 4 or 5 yard short gains and tonight was no different. While Tyreek Hill grabbed 12 receptions for 94 yards in the victory, his dynamic duo partner Travis Kelce only had 4 receptions for 27 yards with a lost fumble. Kansas City’s offense this year is comparable to a Lamborghini with a wheel alignment. Sure it’s a beautiful shiny car with a big name brand and people would kill to have a Lambo in their garage but it can simply never run correctly. Until their offense can be aligned they won’t be threats in the AFC. Patrick Mahomes speaks about his offense below.

Ethan Sanabria is a second-year telecommunications student on the digital film and television production track at the University of Florida's College of Journalism and Communications. He has previously worked as a broadcaster for the Florida Flight basketball team and currently helps the production of WUFT news facebook lives. You can reach Ethan on any of his social media or at Ethansanabria@ufl.edu.
@ethansanabria
Previous Coach Dan Mullen Talks South Carolina Game, Need for Competitive Mindset
Next Week 8 NFL Action