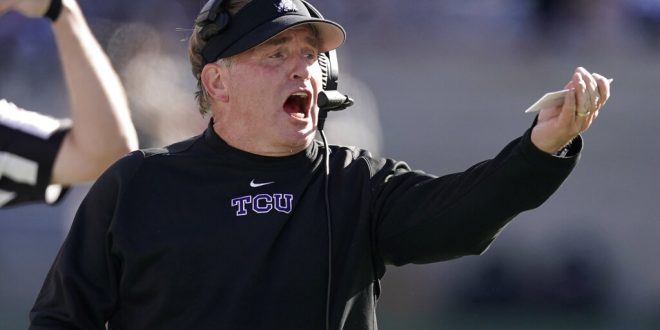 TCU head coach Gary Patterson talks to his players during the first half of an NCAA college football game against Kansas State, Saturday, Oct. 30, 2021, in Manhattan, Kan. (AP Photo/Charlie Riedel)

TCU head coach Gary Patterson has decided to resign. The athletic director for TCU released a statement on Sun, Oct. 31, saying that Patterson’s time with TCU is over. Jerry Kill will take his place as the interim coach.

Reason for the Leavin’

Patterson is the Football bowl subdivision’s second-longest tenured head coach. During Patterson’s 21 seasons with TCU, he led the Horned Frogs to six conference championships and nine bowl game victories. They also had 181 wins over 22 seasons.

Their past previous success has not been the case for TCU’s last few years. The horned frogs have been 21-22 over the past four seasons and they were 3-5 this year.

Rumors have speculated that Patterson was about to get fired and that’s why he unexpectedly resigned. However, it was reported that TCU and Patterson both came to a mutual decision for the head coach to leave.

Kill said TCU is still trying to keep Patterson’s legacy alive by still recruiting new players and looking to hire a new head coach. “Were not stopping trying to help TCU,” he said.

When asked how Kill expects the rest of the season should go he responded by saying “We’ll be fine. We’ll be playing for Gary Patterson over the next four weeks. That’s our job, and it’s what we need to do,” he said.

Kill shared his thoughts on what the rest of the season will look like.

The Texas Christian Horned Frogs’ next game will be Saturday, Nov. 6, against the Baylor Bears.

The match-up will take place at Texas Christian with kickoff starting at 3:30 p.m.

“We will be playing for Gary,” Kill said.