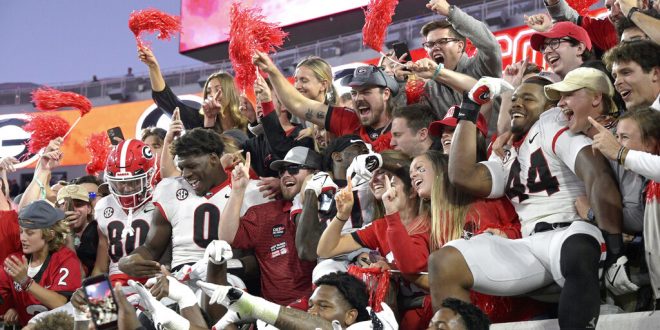 The first College Football Playoff rankings were released on Tuesday with two SEC powers sitting at the top. The Georgia Bulldogs land at No. 1 and are followed in the CFP rankings by the other would-be finalists in Alabama, Michigan State and Oregon.

Georgia Bulldogs top the CFP rankings at No. 1

Firstly, Georgia clinched the SEC East after their dominating 34-7 win over the Florida Gators. Now the Bulldogs post a 6-0 record within the SEC and 8-0 record overall, one of six remaining unbeaten teams left in college football.

Secondly, the Bulldogs feature one of the most potent defenses in college football. In their rivalry matchup the Gators, Georgia finished the first half with 21 points unanswered. Further, the Bulldogs defense scored a touchdown as well as forcing three turnovers to further lift Georgia to their statement victory. And over eight games played, the defense gave up only five touchdowns.

Above all, the Bulldogs have steamrolled each of their opponents this season to earn an obvious seat at the top.

The Crimson Tide enters the rankings with one loss and ahead of three undefeated Power 5 teams. Further, Alabama is currently ranked third in the AP Press. Nonetheless, the Crimson Tide lands at the No. 2 seat in the CFP rankings. Subsequently, Gary Barta, CFP Committee Chair, commented on how the selection committee came to an agreement on Alabama to sit at No. 2.

After their 41-38 upset loss to Texas A&M in October, Alabama has small room for error. Therefore, the Crimson Tide will need to take care of business the rest of the way in its final four regular season games, including facing No. 12 Auburn on November 27. If Alabama continues rolling, the SEC Championship game on December 4 will likely be between the top two teams in the country.

After a come-from-behind 37-33 win over No. 7 Michigan over the past weekend, Michigan State appears to be in control of their destiny. Barta explained how the Spartans came to land their position at third.

Barta further expanded upon the selection committee’s process when determining the initial rankings.

The win over Michigan signaled Michigan State’s first hurdle in reaching the playoff. On the other hand, the Spartans still have a slew of matchups with ranked opponents remaining.

For instance, one of the biggest remaining games will come November 20 when Michigan State will face Ohio State. The Buckeyes are one of the first two teams out of the first CFP poll, currently sitting at No. 5. As a result, the showdown between the Spartans and Ohio State is going to have a lot of say in the final seeding come December.

Oregon enters the CFP rankings as the lone representative of the Pac-12. And by virtue of the Ducks beating Ohio State 35-28 in Week 2, Oregon is chiming into the ranks at No. 4.  Berta explained how the head-to-head matters with the Ducks edging past the Buckeyes in the CFP rundown.

The ducks currently have two victories over ranked opponents as well as another chance come a potential appearance in the Pac-12 Championship game. Nonetheless, as the 2021 college football season enters the final five weeks of play, it is up to the CFP committee to select which four teams will play for the national championship.

The final rankings will come December 5 after the conference championship games are played. Finally, the top four teams will meet in the CFP national semifinals that are schedule for December 31.

Tori Edwards is a fourth-year Telecommunications student specializing in News with an outside concentration in Sport Management. Tori works as an author and reporter for WRUF.com and is the voice of trendings on Monday afternoons on ESPN 98.1 FM - 850 AM WRUF. You can reach Tori at victoriaedwards@ufl.edu.
@ToriEdwardsNews
Previous Latest CFB Rankings Snubs Unbeaten Bearcats
Next Oregon moves into playoff spot after debuting No.4 in CFP ranking