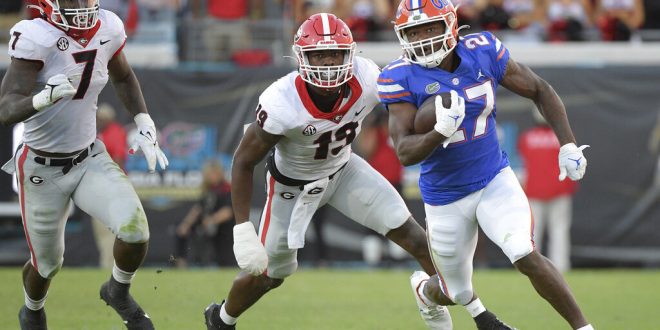 Florida Georgia game ends in huge victory for the Bulldogs

The Florida Georgia game is one of the most exciting rivalries in college sports. This time around, it was a very one-sided game with the Georgia Bulldogs taking the Gators down 34-7.

How the Florida Georgia game went down

The first quarter was the defense show. Neither team scored a point until the second quarter. Both teams did, however, have an attempt at a field goal. Both missed.

The second quarter was more of the same, until the last three minutes. Georgia scored a field goal halfway through the quarter, but with three minutes left, everything unraveled for the Gators.

Gators coach Dan Mullen talked about how the team needs to have a different attitude when something negative attitudes.

The second half started much how the first half started. Florida missed a field goal and Georgia was able to only manage one field goal.

In the fourth quarter, going into the last eight minutes, Florida was still being held to zero points. The Gators were at risk of being shut out for the first time since 1988, which made a 417 game streak of scoring points.

The Gators were able to finally get into the end zone from Emory Jones’s athleticism. Jones was able to run it in for a goal-line score.

Gators running back Dameon Pierce spoke on how it felt to get on the scoreboard.

Georgia added on one last touchdown to finish off the game, ending with a score of 34-7.

The Gators gained more yards than the Bulldogs, more first downs, and tied the turnover battle, yet lost by 27 points.

Going into next week

Dan Mullen owned responsibility for where the Gators are at at this point in the season and where he plans to go from here.

Dameon Pierce talked about what practice will look like starting on Monday. He expects Dan Mullen to have a lot to talk about.

Jensen Young is a journalism student at the University of Florida. He works as a sports writer for WRUF.com and is the voice of trendings on Wednesday mornings on the WRUF radio station.
@Jensen_Young9
Previous Florida NFL Teams In Action
Next Pat Dooley’s Grades: Florida vs UGA